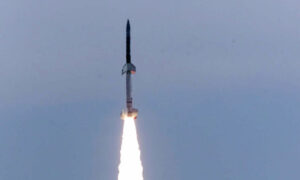 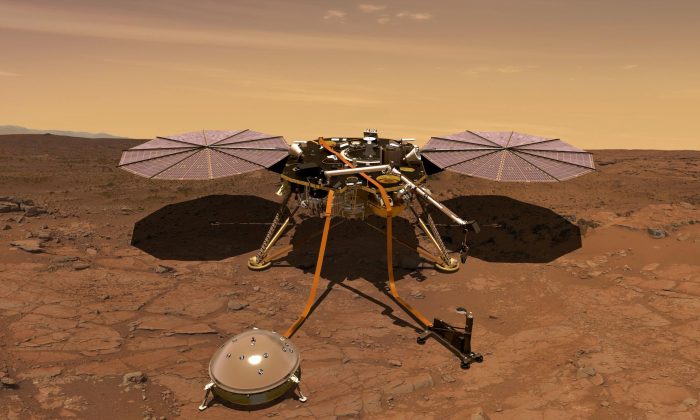 The Mars InSight probe is shown in this artist's rendition operating on the surface of Mars, due to lift off from Vandenberg Air Force Base, California, U.S. on May 5, 2018 in this image obtained on May 3, 2018. (NASA/Handout via Reuters/File Photo)
Space

LOS ANGELES—After decades exploring the surface of Mars, NASA is set for the weekend launch of its first robotic lander dedicated to studying the red planet’s deep interior, with instruments to detect planetary seismic rumblings never measured anywhere but Earth.

The Mars InSight probe is due for liftoff on Saturday before dawn from Vandenberg Air Force Base near the central California coast, treating early risers across a wide region to the luminous spectacle of the first interplanetary spacecraft to be launched from the U.S. West Coast.

The lander will be carried aloft for NASA and its Jet Propulsion Laboratory (JPL) atop a powerful, 19-story Atlas 5 rocket from the fleet of United Launch Alliance, a partnership of Lockheed Martin Corp and Boeing Co.

InSight will be released about 90 minutes after launch on a 301 million-mile (548 km) flight to Mars, and is due to reach its destination six months later, landing on a flat, smooth plain close to the planet’s equator called the Elysium Planitia.

The 800-pound (360 kg) spacecraft—its name is short for Interior Exploration Using Seismic Investigations, Geodesy and Heat Transport—marks the 21st U.S.-launched Martian exploration, dating back to the Mariner fly-by missions of the 1960s. Nearly two dozen other Mars missions have been launched by other nations.

Once settled, the solar-powered InSight will spend two years—one about one Martian year—plumbing the depths of the planet’s interior for clues to how Mars took form and, by extension, the origins of the Earth and other rocky planets.

“The science we want to do with this mission is really the science of understanding the early solar system,” JPL’s Bruce Banerdt, InSight principal investigator, said during a pre-launch briefing for reporters on Thursday.

While Earth’s tectonics and other forces have erased most evidence of its early history, much of Mars—about one-third the size of Earth—is believed to have remained relatively static for more than 3 billion years, creating a geologic time machine for scientists.

InSight’s primary instrument is a French-built seismometer, a device designed to detect the slightest ground motion from “marsquakes,” even those on the opposite side of the planet. The instrument is so sensitive, Banerdt said, that it can measure a seismic wave just one-half the radius of a hydrogen atom.

Scientists expect to see a dozen to 100 marsquakes over the course of the mission, producing data that will help them deduce the depth, density and composition of the planet’s core, the rocky mantle surrounding it and the outermost layer, the crust.

InSight is not the first attempt to measure Martian seismic activity. The Viking probes of the mid-1970s were equipped with seismometers, too, but they were bolted to the top of the landers, which swayed in Martian winds on legs built with shock absorbers.

Banerdt called those “handicapped experiments,” joking, “We didn’t do seismology on Mars—we did it 3 feet above Mars.”

Apollo missions to the moon brought seismometers to the lunar surface as well, detecting thousands of moonquakes and meteorite impacts. But InSight is expected to yield the first meaningful data on internal planetary tremors beyond Earth.

Insight also will be outfitted with a German-made drill designed to burrow as much as 16 feet (5 meters) underground, pulling behind it a cable encasing a thermal probe to measure heat flowing from inside the planet.

A third instrument is a special transmitter to beam radio signals back to Earth, tracking Mars’ subtle rotational wobble at its north pole to reveal the size of the planet’s core and possibly whether it is molten.

Hitching a ride aboard the same rocket that launches InSight will be a pair of miniature satellites called CubeSats, which will fly to Mars on their own paths behind the lander in a first deep-space test of the technology.

The twin briefcase-sized objects, if they survive the journey, will ultimately soar past the red planet, offering NASA a new interplanetary satellite platform that carries a fraction of the weight, and cost, of larger traditional spacecraft.