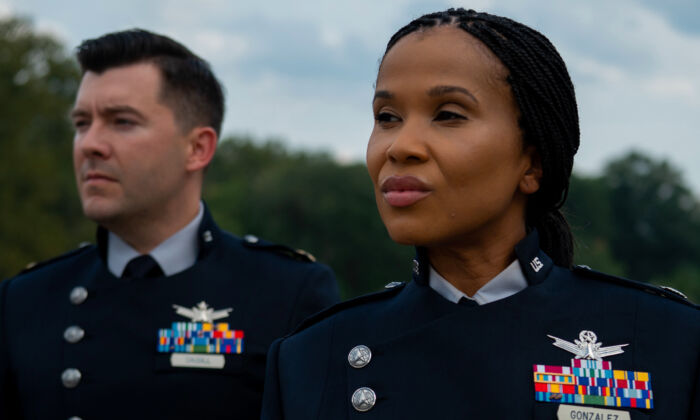 During a speech at the Air Force Association’s Air, Space & Cyber Conference in National Harbor, Maryland, Chief of Space Operations Gen. John W. “Jay” Raymond called two Guardians onto the stage to showcase the prototype. He noted that the service is open to “comments and tweaks” in the coming months before the uniform goes into wear testing.

The coat’s six silver buttons, according to Raymond, are meant to represent the fact that the USSF is the sixth branch of the U.S. Armed Services. Photos released by the official USSF Twitter account reveal more details, including the service’s delta emblem on the buttons and mirror-finished “U.S.” pins on the collar.

Raymond also revealed the USSF’s physical training uniform, which is being wear-tested. A video shows the uniform and a gray T-shirt bearing the stylized words “Space Force” in white on the back, and black shorts with the delta emblem in white.

The Guardians will continue to wear the Operation Camouflage Pattern (OCP) uniform as their combat uniform. The OCP is already in use by the Army and the Air Force.

The uniform announcement comes after USSF Chief Master Sergeant Roger A. Towberman showed off the new insignia on social media.

“The delta is the foundation for all USSF enlisted insignia,” read an infographic shared by Towberman. “The six-sided border surrounding the insignia represents the USSF as the sixth branch of the U.S. Armed Forces.”

According to Towberman, each specialist stripe represents “terra firma, a solid foundation of skills” upon which Space Force operations are built. Changing the straight stripes to chevrons at higher ranks symbolizes the change Guardians go through as they take on greater responsibilities.

“The placement of the Delta above the globe further signifies this higher level of responsibility, while the Delta breaking through the orbits shows their willingness to explore and innovate,” he explained.