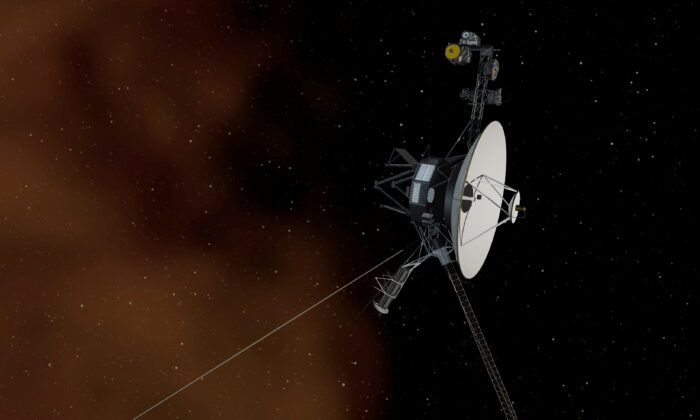 NASA’s Voyager 1 probe, which is still traveling through space 45 years after launch, has sent data that has stumped engineers at the space agency.

The probe is operating normally, performing its usual functions like gathering and returning science data as well as receiving and executing commands from Earth. However, readouts from the Altitude Articulation and Control System (AACS) do not reflect what is happening aboard the interstellar explorer, a May 18 NASA news release says.

The AACS controls the probe’s orientation and keeps its high-gain antenna pointed precisely toward Earth. This enables the spacecraft to send data back home. Though AACS appears to be normal, the telemetry data it is currently sending back is invalid.

“For instance, the data may appear to be randomly generated, or does not reflect any possible state the AACS could be in,” according to the post.

However, the issue has not triggered the probe’s fault protection systems. The signal being sent has not weakened either, which indicates that the antenna remains at its prescribed orientation with Earth.

NASA is attempting to determine whether the invalid data is coming from the AACS or another system that is tasked with generating and sending the telemetry data.

Such a mystery is “sort of par for the course” at this stage of the Voyager’s mission, said Suzanne Dodd, project manager for Voyager 1 and 2 at NASA’s Jet Propulsion Laboratory in Southern California.

Voyager 1 and 2 were both launched in 1977. Voyager 1 is currently 14.5 billion miles from earth and has functioned far longer than anticipated. The Voyager team is working to make sure that Voyager 1 keeps operating beyond 2025.

Since light takes 20 hours and 33 minutes to travel 14.5 billion miles, a two-way message between Earth and the probe takes roughly two days. Voyager 1 and 2 are both in interstellar space, the only objects from the earth in this region.

“We’re also in interstellar space – a high-radiation environment that no spacecraft have flown in before. So there are some big challenges for the engineering team,” Dodd said, according to the news release.

While engineers continue working to solve the mystery of Voyager 1’s telemetry, the scientific data sent by the probe has proved immensely valuable, especially data about interstellar space.

The probe crossed the heliosphere boundary—the magnetic bubble inflated by the sun—and entered the interstellar region on Aug. 25, 2012.

In 2021, Stella Ocker, a Ph.D. student at Cornell University in Ithaca, New York, published a study detailing the first continuous measurement of the density of material in interstellar space.

“This detection offers us a new way to measure the density of interstellar space and opens up a new pathway for us to explore the structure of the very nearby interstellar medium,” Ocker said in a May 2021 NASA news release.