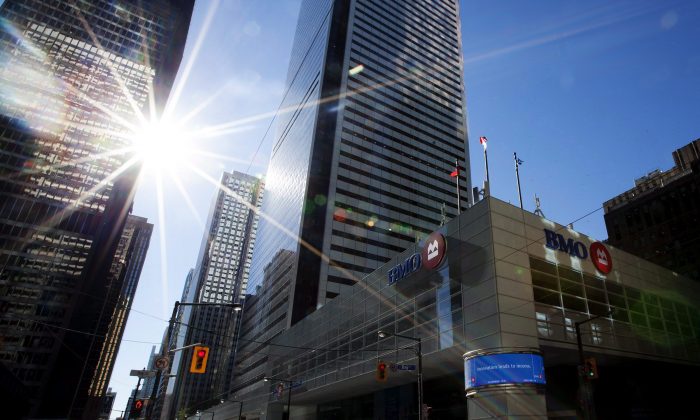 Bank shareholders, creditors instead of taxpayers to bear potential losses under 'bail-in' model
By Rahul Vaidyanath

Credit rating agency Standard and Poor’s lowered its outlook on Canada’s six largest banks on Aug. 8, a week after the federal government began forging ahead with its plan to protect taxpayers from having to bail out failing banks.

Lowering its outlook means the rating agency may lower the banks’ credit rating within two years, which could make it more expensive for them to borrow in capital markets due to a perceived slightly greater credit risk.

Canada’s big six banks have S&P ratings ranging from “A” to “AA-“. A bank with an “A” rating has a strong capacity to meet its financial commitments (pay interest on bonds etc.), according to S&P.

On Aug. 1, Canadian Finance Minister Joe Oliver initiated a public consultation on a “taxpayer protection and bank recapitalization regime” (also known as the “bail-in” model). This regime is to be part of the government’s comprehensive risk management framework announced in Economic Action Plan 2013. The policy to be developed aims to preserve financial stability in Canada while protecting taxpayers from bearing the brunt of rescuing the big banks if they run into difficulty.

The framework deals with Canada’s “big six” banks: Royal Bank of Canada, Toronto-Dominion Bank, Bank of Montreal, Canadian Imperial Bank of Commerce, National Bank of Canada, and Bank of Nova Scotia. Their regulator, the Office of the Superintendent of Financial Institutions (OSFI), calls them “domestic systemically important banks” (D-SIBs). Their viability is deemed critical for the proper functioning of the Canadian financial system and economy.

A bail-in would take place if a D-SIB were to become non-viable (for example, is unable to make its debt payments). Losses by the bank would be borne by its shareholders and creditors instead of taxpayers. This is achieved by converting some of the bank’s debt into capital (common stock), giving creditors equity in the bank in exchange for helping to recapitalize the bank. (Banks are required by regulators to have minimum levels of capital.)

“The outlook revision reflects our expectation of reduced potential for extraordinary government support arising from implementation of the proposed new elements of the resolution framework for Canadian banks,” said S&P’s credit analyst Tom Connell in the Aug. 8 press release.

Canadian banks emerged from the financial crisis like superstars, with none of them failing. But one lesson from the crisis was that certain banks are “too big to fail.” While injecting taxpayer money into some of those banks was deemed necessary in order to avoid even greater financial chaos should they fail, measures were needed to avoid future crises and controversial taxpayer-funded bail-outs.

The G-20 leaders endorsed the bail-in concept in November 2011 as part of overall financial sector reform coming out of the crisis.

It’s important to distinguish bail-in from bail-out. The U.S. government bailed out Goldman Sachs to the tune of billions of dollars of taxpayer money during the financial crisis. In Canada, with the federal government putting the onus on the banks to take care of themselves, S&P lowered its outlook of the D-SIBs to negative from stable.

Early last year Cyprus’s two largest banks underwent a bail-in, with depositors getting newly issued Bank of Cyprus shares in exchange for their deposits. This was a first for the Eurozone and, under new and developing regulations, bail-ins will become the norm as a means of resolving failing banks prior to obtaining a formal bail-out.

The S&P credit ratings on the big six banks currently benefit from either one or two notches of uplift for anticipated extraordinary government support.

“We believe that S&P will reclassify the Canadian government tendency to support a bank as ‘uncertain’ from the current ‘supportive’ category,” wrote Bank of Montreal analyst George Lazarevski in an Aug. 8 note. This would mean Royal Bank, Toronto-Dominion, Bank of Nova Scotia, and National Bank would get downgraded by one notch to “A+” for Royal Bank and TD, to “A” for Bank of Nova Scotia, and to “A-” for National; CIBC and Bank of Montreal would get downgraded by two notches to “A-“.

Moody’s had already cut its outlook on the big Canadian banks in June. Dominion Bond Rating Service (DBRS) is expected to follow suit.