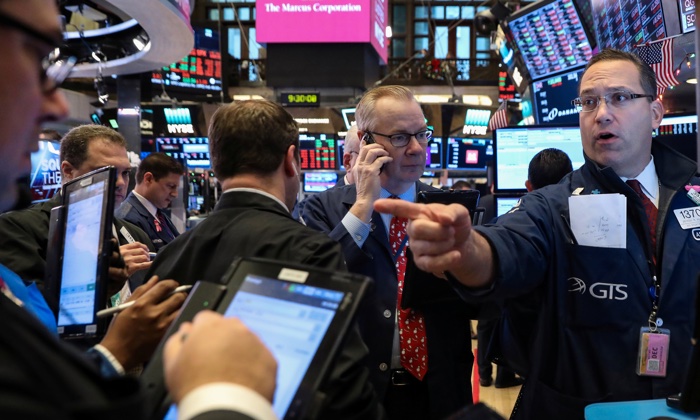 Traders work on the floor of the New York Stock Exchange in New York on Dec. 14, 2018. (Brendan McDermid/Reuters)
Markets

NEW YORK—Wall Street’s major indexes all slid more than 2 percent on Dec. 17, with the benchmark S&P 500 closing at its lowest in 14 months, on concerns about slowing economic growth ahead of a highly anticipated decision from the Federal Reserve this week on the course of United States interest-rate hikes.

The S&P 500 hit its lowest since October 2017 to breach lows reached during its sell-off in February, having wiped out about $3.4 trillion of market value since late September. The small-cap Russell 2000 index confirmed a bear market, having fallen more than 20 percent from its Aug. 31 closing high.

The S&P 500 briefly erased its losses in late-morning trade, but the index resumed its steep decline after Jeffrey Gundlach, chief executive of DoubleLine Capital, said that U.S. stocks were in a bear market.

Nearly 2,000 stocks on the New York Stock Exchange and Nasdaq hit 52-week lows, the most in nearly three years. Only 40 reached new highs.

Investors said market skittishness was likely to persist heading into the Federal Open Market Committee meeting on Tuesday and Wednesday.

An indication that the Fed would slow its pace of interest-rate hikes could calm markets, but the U.S. central bank’s intentions remain unclear, said Ryan Detrick, senior market strategist at LPL Financial in Charlotte, North Carolina.

“We’re all holding our breath for the Fed,” Detrick said. “If the Fed takes its foot off the pedal for the first half of next year, that would get rid of one uncertainty.”

The Cboe Volatility Index, the most widely followed gauge of expected near-term gyrations for the S&P 500, finished up 2.89 points at 24.52, its highest close in seven weeks.

Shares of insurer UnitedHealth Group Inc fell 2.6 percent after a federal judge late on Friday ruled that the Affordable Care Act, commonly known as Obamacare, was unconstitutional. UnitedHealth was the biggest drag on the Dow.

Shares of Goldman Sachs Group Inc dropped 2.8 percent to a two-year low after Malaysia filed criminal charges against the bank in connection with an investigation into suspected corruption and money laundering involving the sovereign wealth fund 1MDB. The stock has the biggest year-to-date percentage decline among Dow components.

Twitter Inc shares slid 6.8 percent after the social media company warned of suspicious traffic from China and Saudi Arabia and disclosed an issue that could have revealed the country code of its users’ phone numbers.

Declining issues outnumbered advancers on the NYSE by a 5.55-to-1 ratio; on Nasdaq, a 4.31-to-1 ratio favored decliners.

Volume on U.S. exchanges was 9.44 billion shares, compared to the 8.01 billion average over the last 20 trading days.