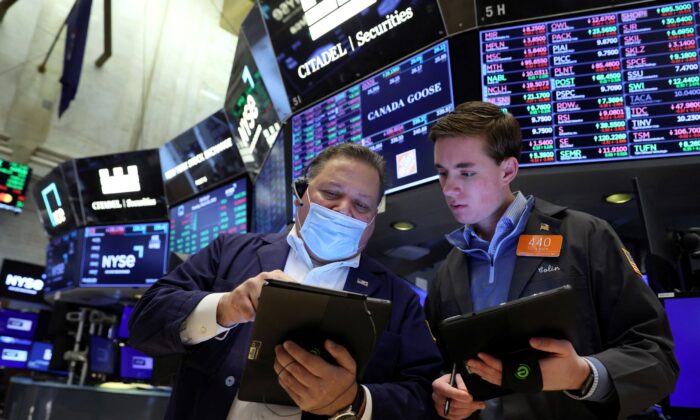 The S&P 500 was trading largely flat on Monday as gains in Tesla were offset by declines in bank and energy shares, ahead of the first face-to-face peace talks between Ukraine and Russia in more than two weeks.

The electric-car maker jumped 5.3 percent after saying that it will seek investor approval to increase its number of shares to enable a stock split.

Oil majors Exxon and Chevron fell 2.8 percent and 1.8 percent, respectively, after crude prices tumbled more than 7 percent as fears over weaker fuel demand in China grew amid a surge in COVID-19 infections.

Strong economic data and gains in beaten-down growth stocks have powered Wall Street’s main indexes in the recent days, despite the Russia-Ukraine conflict and hawkish comments from Federal Reserve policymakers.

“The two factors—change in Fed policy outlook and the Ukraine war—got priced into the market and there was some level of certainty produced, particularly by the Fed meeting that resulted in a pretty significant rally,” said Jay Hatfield, chief investment officer at Infrastructure Capital Management in New York.

Banks declined 1.8 percent after a recent run-up on expectations that the Fed could push harder and faster to tame inflation running at four-decade highs, pushing the benchmark 10-year yield to above 2.5 percent.

One measure of the U.S. bond yield curve—the gap between five and 30-year Treasury yields—inverted for the first time since 2006 signaling rising concerns over economic growth.

Meanwhile, Ukraine and Russia said their delegations would arrive in Turkey for peace talks that are expected to take place on Tuesday.

Apple Inc. slipped 0.3 percent after a report that the company was planning to cut iPhone and AirPod output as rising inflation starts to weigh on demand for consumer electronics.

Poly soared 50.1 percent after HP Inc. said it would buy the audio and video products maker for $1.7 billion in cash. Shares of HP declined 5.4 percent.