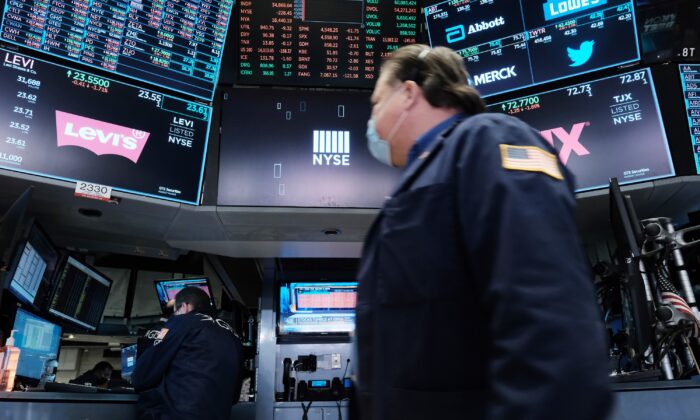 A trader works on the floor of the New York Stock Exchange (NYSE) in New York on Dec. 20, 2021. (Spencer Platt/Getty Images)
Markets

NEW YORK—The S&P 500 ended a volatile session close to unchanged on Thursday, as technology shares fell but financials lent support a day after the market sold off on a hawkish slant in Federal Reserve minutes.

Banks were among top performers among financials, with the S&P 500 bank index up 2.6 percent following a rise in the benchmark U.S. 10-year Treasury yield, which touched its highest level since April 2021.  Higher interest rates can increase profit margins for banks and financial firms.

Shares of Meta Platforms jumped 2.6 percent, the biggest boost to the S&P 500 and Nasdaq.

The Dow ended down 0.5 percent and the heavily weighted S&P 500 technology sector also eased 0.5 percent. The tech sector was biggest drag on the S&P 500 on Wednesday when minutes from the Fed’s December meeting signaled the possibility of sooner-than-expected interest rate hikes.

“We have a jobs report tomorrow, which continues to be a focal area for the market in terms of the progression of the labor market,” said Bill Northey, senior investment director at U.S. Bank Wealth Management.

A private payrolls report on Wednesday was stronger than expected.

Investors this week have mostly rotated out of technology-heavy growth shares and into more value-oriented stocks that tend to do better in a high interest-rate environment.

The S&P 500 value index was up 0.1 percent on Thursday compared with a 0.3 percent decline in its growth counterpart.

Advancing issues outnumbered declining ones on the NYSE by a 1.07-to-1 ratio; on Nasdaq, a 1.13-to-1 ratio favored decliners.

Volume on U.S. exchanges was 11.10 billion shares, compared with the 10.4 billion average for the full session over the last 20 trading days.