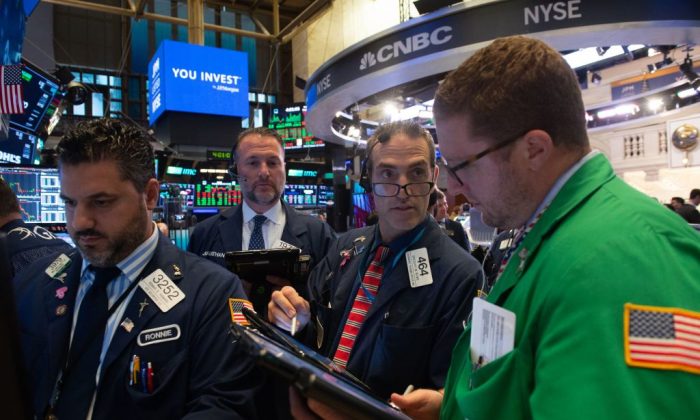 The blended net profit margin for the S&P 500 for the third quarter is expected to be 11.6 percent, according to data provider FactSet. If that holds true, it will be the second-highest net profit margin in the last 10 years. The highest level was 11.8 percent, which was reached in the second quarter of this year.

And going forward, analysts expect net profit margins to remain at the same level this year and gradually increase to 12.3 percent in the first three quarters of next year.

The lower tax rate is more than offsetting the impact of rising costs, according to John Butters, a senior analyst at FactSet.

He also thinks that future projections might slightly come down, as analysts “tend to be more optimistic the further out the projections go, particularly on the earnings side.”

The top three sectors that report the highest profit margins are real estate, information technology, and financials, according to FactSet.

The annual earnings growth rate for the third quarter is estimated to be above 19 percent. All eleven sectors will be reporting year-over-year growth in earnings, with seven of them reporting double-digit growth.

In the third quarter, the oil and gas companies are expected to report the highest annual earnings growth of all eleven sectors. The growth rate is expected to be more than 90 percent. This unusually high growth rate is driven by a rally in oil prices, which jumped by more than 40 percent in the past year.

Meanwhile, companies see a more negative impact from a strong U.S. dollar than tariffs on third-quarter earnings. According to the earnings call transcripts of the companies that have reported to date, foreign exchange has been cited by more than 60 percent of the companies, says FactSet.

The foreign exchange is mentioned as the factor that either had a negative impact on the third quarter results or expected to have an impact on future quarters.

So a strong U.S. dollar or weak economies outside the United States has a negative impact on company results, he said.

Other factors that are mentioned as having a negative impact on earnings are raw material cost inflation, labor cost increase, and tariffs. So far, tariffs rank fourth among issues listed by S&P 500 companies.

“Regarding trade matters, current tariffs impact a small portion of our volume coming out of China,” Raj Subramaniam, chief marketing and communications officer of FedEx said during an earnings call on Sept. 17.

“However, the uncertainty surrounding the issue is not helping and thus has a broader impact on the market.”