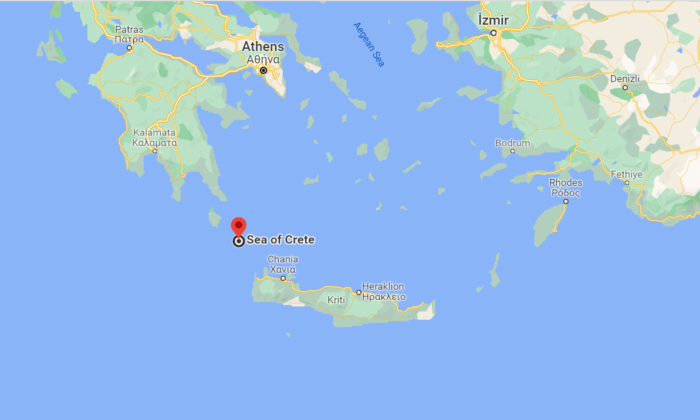 A map shows the location between the Peloponnese and the island of Crete, in Greece, on Dec. 18, 2021. (Google Maps/Screenshot via The Epoch Times)
Europe

ATHENS—An strong earthquake rattled parts of southern Greece on Saturday, with no immediate reports of damage or injuries.

A tremor with a magnitude of 5.4 and a depth of almost 58 km (36 miles) occurred at 0516 GMT in the sea between the Peloponnese and the island of Crete, the Athens Geodynamic Institute reported.

Greek media reported the earthquake was felt from Athens to Crete.

It was “about five seconds long, quite strong even in the basement of a building,” one witness in the city of Chania on Crete, wrote on the European-Mediterranean Seismological Centre (EMSC) testimony board.

Greece’s fire brigade service said it had no reports of damage.

“Because of its considerable depth, the tremor was felt in a wider area,” Efthymios Lekkas, head of Greece’s organization for anti-seismic planning, told Greek state broadcaster ERT.