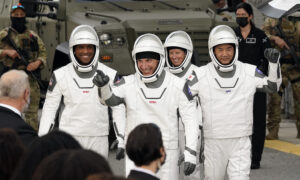 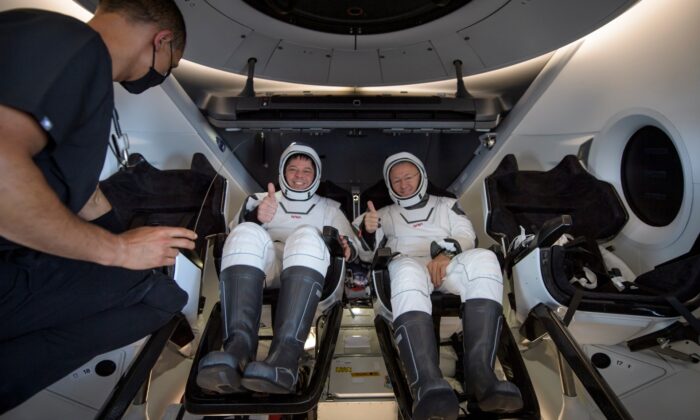 NASA astronauts Robert Behnken (L) and Douglas Hurley are seen inside the SpaceX Crew Dragon Endeavour spacecraft onboard the SpaceX GO Navigator recovery ship shortly after having landed in the Gulf of Mexico off the coast of Pensacola, Fla., on Aug. 2, 2020. (Bill Ingalls/NASA via AP)
Southern California

LOS ANGELES (CNS)—NASA announced Dec. 9 the selection of three Southern California residents among the first 18 astronauts of the Artemis program, the space agency’s effort to land the first woman and next man on the moon by 2024.

“I give you the heroes who will carry us to the Moon and beyond—the Artemis generation,” Pence said. “It is amazing to think that the next man and first woman on the Moon are among the names. … The Artemis team astronauts are the future of American space exploration—and that future is bright.”

The agency’s modern lunar exploration program will include establishing a sustainable human lunar presence by the end of the decade. NASA officials said they will use what’s on and around the Moon to take the next giant leap: sending astronauts to Mars.

—Joseph Acaba, of Anaheim, who was selected as a NASA astronaut in 2004. He has spent 306 days in space and performed three spacewalks. He holds a bachelor’s degree in geology, as well as master’s degrees in geology and education. Before coming to NASA, Acaba taught high school science and middle school math and science.

—Victor Glover, of Pomona, who was selected as an astronaut in 2013. The U.S. Navy Commander earned a bachelor’s degree in general engineering and master’s degrees in flight test engineering, systems engineering, and military operational art and science. He piloted the Crew-1 Dragon Resilience and is currently serving as an Expedition 64 flight engineer aboard the International Space Station; and

—Jonny Kim, of Los Angeles, who came to NASA as part of the 2017 astronaut class. He enlisted in the U.S. Navy following high school. He became a Navy SEAL before earning his commission and going back to school to pursue a bachelor’s degree in mathematics, followed by a doctor of medicine.

“We are incredibly grateful for the president and vice president’s support of the Artemis program, as well as the bipartisan support for all of NASA’s science, aeronautics research, technology development, and human exploration goals,” NASA Administrator Jim Bridenstine said.

“As a result, we’re excited to share this next step in exploration—naming the Artemis team of astronauts who will lead the way, which includes the first woman and next man to walk on the lunar surface.”

The astronauts will help NASA prepare for the coming Artemis missions, which begin next year working with the agency’s commercial partners as they develop human landing systems, assisting in the development of training, defining hardware requirements, and consulting on technical development. They also will engage the public and industry on the Artemis program and NASA’s exploration plans.

“There is so much exciting work ahead of us as we return to the Moon, and it will take the entire astronaut corps to make that happen,” Chief Astronaut Pat Forrester said.

“Walking on the lunar surface would be a dream come true for any one of us, and any part we can play in making that happen is an honor. I am proud of this particular group of men and women and know that any of them would do an outstanding job representing NASA and the United States on a future Artemis mission.”