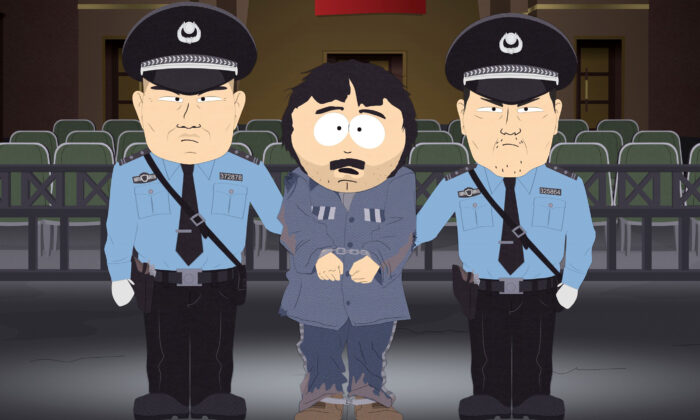 A still from the South Park episode "Band in China." (Comedy Central/Handout via Reuters)
US News

The creators of the comic cartoon series, “South Park,” apparently wanted to make sure the Chinese communist regime knows how they feel after their show was scrubbed from the Chinese internet.

In the episode—which also happens to be the show’s 300th—Randy’s business partner, a towel named Towelie, tries to stop Randy from selling marijuana to China due to its human rights abuses, just as the latter achieves a milestone $300,000 sales record, largely thanks to business in China.

“I’m never working for a company that’s regulated by a communist government,” Towelie says, pressing Randy to promise “no more kissing China’s [expletive]” while threatening to leave if Randy doesn’t condemn the Chinese regime. Towelie asks him to shout the anti-Chinese-government message. Randy decides to appease Towelie in order to keep him as a partner.

South Park’s defiant message came just days after their previous episode, “Band in China,” called out the regime’s censorship, prompting the Chinese censors to essentially erase the show’s existence from the Chinese internet on Monday. The episode had hit on a range of issues that are taboo in mainland China, including forced organ harvesting, prison torture, slave labor camps, and brainwashing sessions.

South Park’s creators, Trey Parker and Matt Stone, further bashed the Chinese regime with a sarcastic “apology” on Oct. 7 while announcing the release of the “Shots” episode.

“Xi doesn’t look just like Winnie the Pooh at all … Long live the Great Communist Party of China! May this autumn’s sorghum harvest be bountiful! We good now, China?” They said in the statement.

In the Band in China episode, Randy flies to China in hopes to expand his marijuana business but winds up in Chinese prison soon after landing. There, he meets with fellow prisoners Winnie-the-Pooh and Piglet, who became victims of China’s crackdown due to memes comparing the characters with Chinese leader Xi Jinping. Randy eventually kills Pooh in exchange for a pass to his marijuana business.

“Like the NBA, we welcome the Chinese censors into our homes and into our hearts. We too love money more than freedom and democracy,” they said, making fun of the National Basketball Association (NBA) for kowtowing to Beijing in the recent pro-Hong Kong tweet fallout.

A Houston Rockets executive tweet supporting pro-democracy activists in Hong Kong has caught the NBA in a firestorm in China. Despite the tweet later being replaced with a vague apology, several of the NBA’s key business partners have since severed ties with the company.