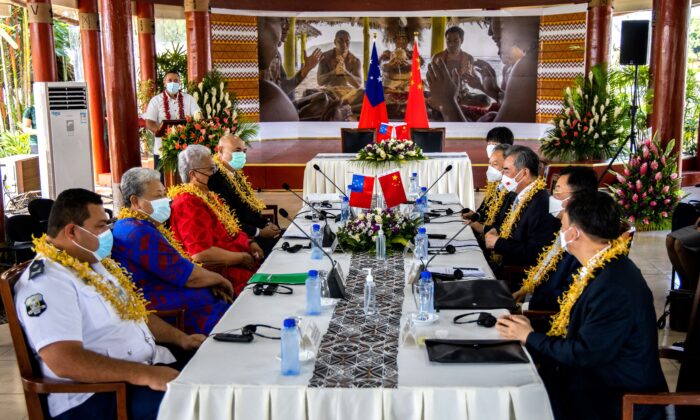 As the United States shifts its strategic focus to the Indo-Pacific, the Chinese Communist Party (CCP) attempts to gain control over island nations in the region. China’s foreign minister introduced a broad-reaching security and trade pact during a recent visit to the South Pacific. But the United States and some Pacific nations raised concerns.

He held a virtual meeting in Fiji with foreign ministers from Pacific nations on May 30, in which a security and trade agreement was discussed. However, Wang told the invited countries not to be “too anxious” after the meeting failed to reach a consensus on the pact—some wanted to postpone their decision or amend the draft communique.

The document outlined how China would work with the island nations to develop a marine fisheries program related to harvesting tuna, one of the region’s largest industries. This move was in opposition to the 1988 South Pacific Tuna Treaty between the United States, Australia, New Zealand, and 14 Pacific Island nations. The treaty allowed U.S. vessels to fish in the exclusive economic zones of the other signatories. The treaty is to be renewed this year.

The proposed security and trade agreement immediately provoked concerns from the United States and its allies in the region, including Australia, New Zealand, Japan, and Micronesia. These countries feared the CCP could potentially take complete control of the region and disrupt its safety, stability, and economy.

The island nation of Fiji decided to join these countries in aligning with the U.S.-led Indo-Pacific Economic Framework (IPEF). Fiji’s decision was affirmed on May 26 in a statement issued by the White House, which welcomed Fiji as the 14th founding nation and the first of the Pacific Island nations to join the IPEF.

Micronesia said it had no intention of signing China’s proposed security deal. The country previously signed a security agreement with the United States and already has an economic agreement with China.

Micronesian President David Panuelo sent a letter to the heads of other Pacific Island nations, warning them that Beijing’s proposed deal would unnecessarily exacerbate geopolitical tensions and threaten the region’s stability. He said the agreement was “the single most game-changing offer in the Pacific in our lifetimes.”

On May 26, U.S. State Department spokesperson Ned Price also noted the CCP could use China’s agreement to exploit the island nations and destabilize the region.

She said: “The island nations of the Pacific are useful for controlling chokepoints and sea lanes of communication. So China has been, for a number of years now, looking for locations for ports, and airfields, and communication cables. That’s all part of their military agenda in the Pacific.”

Brady believes the CCP’s activities in the Pacific Islands could draw the entire region into a larger geopolitical conflict as occurred during World War II. She warned if tensions erupted in the region, a “hostile power” could take control of the Solomon Islands, Papua New Guinea, New Caledonia, and Kiribati. If this occurs, it could lead to the blocking of maritime routes and affect the security of the entire region.

Brady had previously published a column in which she described how the CCP is using its maritime Belt and Road Initiative (BRI, also called “One Belt, One Road”) to extend southward. The purpose, she said, is to penetrate the region and gain access to critical military ports and airports.

Moreover, she posted a comment on Twitter on May 27, praising the Pacific Islands for standing together in opposition to the CCP’s attempts to control the region.

On the same day, during a visit to Fiji, Australia’s new foreign minister, Penny Wong, said the world has changed; there is more strategic competition and more disruption of international rules. She expressed deep concerns about the potential consequences of the Solomon Islands’ recent security agreement with the CCP.