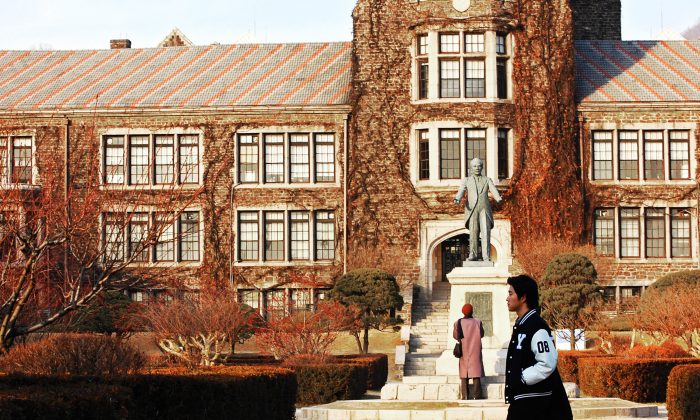 The next generation get a taster of university life. (Jeff/CC BY-ND 2.0)
Education

Spurred on by a globalisation of higher education, over 4.5m students from around the world studied abroad in 2012, more than double the number of students a decade earlier. While the United States, the United Kingdom, Australia, Canada, France and Germany remain the major destination countries, hosting more than 50% of foreign students worldwide, many countries which traditionally sent students abroad have started receiving them in recent decades – especially in Asia.

South Korea follows this general pattern: it is third place in Asia after China and India in the number of students it sends abroad to study. But at the same time, the number of foreign students in Korean universities reached 84,891 in 2014, most of them from China and less developed parts of Asia, especially Vietnam and Mongolia. The number of foreign faculty teaching in Korean universities has also increased from 1,373 (2.4%) in 2000 to 6,034 (6.8%) in 2014. Although the figures are still relatively low compared to the percentages in Europe and North America, they bring a potentially significant force of change to Korean society, which has 97% ethnic homogeneity.

The growing movement of students and faculty across societies naturally creates more culturally diverse campuses. In the US and Europe, such changes have led to significant efforts to create a culture of respect for diversity and inclusion, albeit with much regional and country-level variation in situations and strategies. Despite its critics, Europe has consistently articulated the value of “interculturality”, “diversity” and respect for cultural differences in debates about higher education.

However, this is not the case with Korea and most other Asian nations. One major reason is that Korean universities primarily attract foreign students as a means to clear ends. The universities want them to come to enhance university prestige or create “education hubs” and improving international higher education rankings. They can also help to fill the gap in a declining domestic college student population: the number of high school graduates is expected to fall short of the college entrance quota from 2018. As a result, Korean campuses have become much more diverse. However, appreciation of the intrinsic educational value of a culturally diverse student and faculty body has not been embraced by university leadership.

Our new study on diversity in South Korean higher education shows a noticeable disjuncture between different aspects of diversity in the university environment. Korean universities may have accepted more students of varying racial and ethnic backgrounds, but the curriculum offers limited opportunities for students to think more deeply about assumptions concerning race, ethnicity and other individual or group differences. Courses focusing on racial and ethnic groups in Korea are conspicuously absent and those few addressing cultural differences focus on international (not internal) diversity, suggesting that diversity is viewed as something “out there” in the world that is still very unfamiliar and perhaps undesirable.

At the interpersonal level, both Korean and foreign students report very low levels of cross-cultural interaction. Foreign students often report experiencing cultural chauvinism and ethnocentrism in their encounters with Korean students. A female student from Iran studying at a top Korean university, for instance, said in an interview with us that: “my Korean acquaintances are not interested in getting to know other cultures. They seem to like to live among themselves in their own ways.” There is also a perception that foreign students gain easier admission to Korean universities than Korean students and often attend university on generous scholarships from the Korean government. As one Korean student put it: “We have to work really hard to get in, but international students can get in easy. It’s not fair.”

Foreign faculty, too, rather than being valued as full, contributing members of their academic communities, are often perceived as temporary skilled labour. Korean universities employ them largely to help boost their global credentials: the numbers of foreign faculty, their ability to publish in international journals and teach courses in English all help to raise domestic and international university rankings. There is also a tendency among Koreans to perceive foreign faculty as “second-tier” scholars who were unable to secure employment in their countries of origin. “I don’t feel valued here,” said one foreigner, explaining his reasons for choosing to leave his tenure-track position at a prestigious Korean university.

The Korean government and universities have worked closely together to promote structural diversity in university admissions, but core Korean values of ethnic nationalism remain firmly entrenched at the educational and interpersonal levels. At best, universities assist foreign students and attend to their adjustment needs but neglect to foster a tolerant, inclusive university culture where foreigners are considered full, valued members of Korean universities and society. Such an exclusive culture impedes Korean universities’ aspirations to become global.

Much research demonstrates the positive effects of diversity on various academic and social outcomes such as the ability to form wider friendship networks, increased cultural awareness, acquiring global citizenship skills, improving the campus climate and innovation. Universities are ideal settings for students from different backgrounds to meet, generate new ideas and interact with one another at an early stage in their lives. It is no accident that many of the innovative ideas associated with Microsoft, Yahoo, Google and Facebook were all born on American university campuses, where diversity is embraced. Facilitating diversity and recognising its long-term effects for innovation and development should be a major goal of higher education in Korea.

Korean universities often proclaim that their mission is to become “global” but they should first realise that this requires more than simply recruiting foreigners and offering more courses in English. What is most urgent is to produce “global citizens” through the creation of a campus environment and culture that appreciates and respects diversity. The educational value of such an approach is even more important for a society like Korea that has been built on pride in ethnic nationalism.