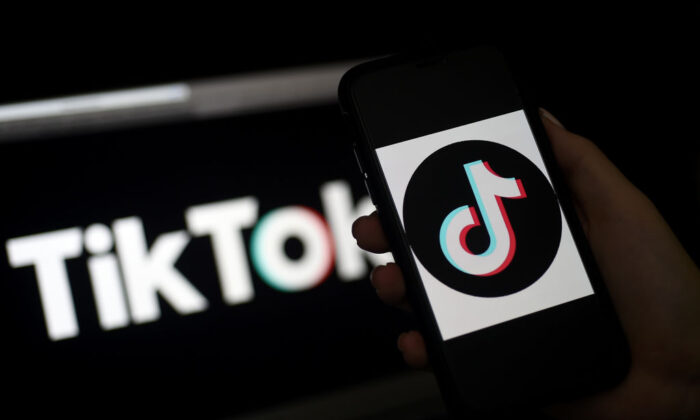 TikTok's logo is displayed on the screen of an iPhone in Arlington, Virginia, on April 13, 2020. (Olivier Douliery/AFP via Getty Images)
By Frank Fang

The Korea Communications Commission (KCC), South Korea’s telecommunications regulator, announced July 15 that it fined TikTok 186 million won (about $154,000) for violating local telecommunications law by collecting data from users under the age of 14 without parental consent, according to Yonhap News Agency.

About 6,000 pieces of data on the underaged users were illegally collected, the regulator found. Additionally, it said TikTok failed to properly notify its users when it transferred local user data to servers in Singapore and the United States without prior notification.

According to Yonhap, KCC started investigating TikTok in October 2019. In February 2019, TikTok paid a $5.7 million fine to settle U.S. government charges that it had illegally collected personal information from users under 13, in violation of the Children’s Online Privacy Protection Act (COPPA).

TikTok, known as “Douyin” in China, was started by the Beijing-based tech firm ByteDance in 2016. It’s extremely popular outside of China, with an estimate of more than 800 million monthly active users worldwide. According to Yonhap, there were 3.4 million users in South Korea as of December 2019.

In the United States, TikTok had about 52.5 million unique visitors, as of March, according to U.S. market research company eMarketer, citing data from media analytics firm Comscore.

Despite paying a hefty fine in the United States, TikTok might not have fully complied with its 2019 settlement.

Last week, Reuters reported that the Federal Trade Commission (FTC) and the U.S. Justice Department were reviewing allegations brought up by several U.S. advocacy groups in May that TikTok continued to violate COPPA, citing an unidentified source and a campaign manager with the U.S. advocacy group Campaign for a Commercial-Free Childhood (CCFC).

On May 14, CCFC was among a coalition of U.S. child advocacy, consumer, and privacy groups that filed a complaint to FTC alleging TikTok’s continued violation, including failure to delete underage users’ personal information that it obtained prior to the settlement.

Many U.S. lawmakers have raised concerns about TikTok in recent months. On May 21, Reps. Greg Walden (R-Ore.) and Cathy McMorris Rodgers (R-Wash.) wrote a letter to Zhang Yiming, founder and CEO of ByteDance, asking him to answer 22 questions before June 5.

One of the questions was whether TikTok shared information it collected on Americans with the Chinese Communist Party (CCP) or any Chinese state-owned entity.

Also on July 15, Rep. Ken Buck (R-Colo.) led 24 of his Republican colleagues in sending a letter to President Donald Trump, urging the administration to ban TikTok and other social media apps linked to the CCP, citing threats to Americans’ privacy due to their capability to collect their data, according to a statement from Buck’s office.

The letter warned about TikTok’s existing privacy policy, which states that the company collects “information you [users] share with us from third-party social network providers, and technical and behavioral information about your use of the Platform,” as well as user information such as IP address and geolocation-related data.

“It is clear that the United States should not trust TikTok or any other Chinese-affiliated social media websites or apps to protect Americans’ data, privacy, or security,” the Congress members stated.

They concluded: “We urge you to take strong action to stop the CCP’s sophisticated espionage campaign against our country and protect our national security.”

“I don’t think there’s any self-imposed deadline for action [against TikTok], but I think we are looking at weeks, not months,” Meadows told reporters.

TikTok was among 59 mostly Chinese mobile apps banned by the Indian government in June. According to a government press release, these apps “engaged in activities which are prejudicial to sovereignty and integrity of India, defense of India, security of state, and public order.”