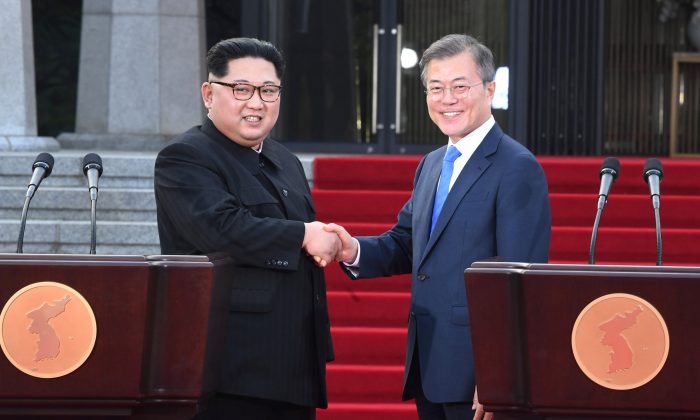 President Donald Trump should win a Nobel Peace Prize for his efforts to resolve the North Korean crisis, according to South Korean President Moon Jae-in.

Additionally, Kim and Moon made history on April 27 when they met on the dividing line between the two countries, agreeing to work on a peace deal and complete denuclearization of the North.

Kim has also said he will allow international observers and journalists to observe the closure of one of North Korea’s nuclear sites. And, in a sign of goodwill, North Korea says it will return to the same time zone as Seoul and Tokyo by moving its clocks forward by half an hour.

“President Trump should win the Nobel Peace Prize. What we need is only peace,” Moon told a meeting of senior secretaries, according to a South Korean official who briefed media.

Moon’s Nobel prize comment came in response to a congratulatory message from Lee Hee-ho, the widow of late South Korean President Kim Dae-jung, in which she said Moon deserved to win the prize in recognition of his efforts, South Korean officials said.

President Trump should win the Nobel Peace Prize. What we need is only peace.
— South Korean President Moon Jae-in

Both South Korean and Japanese officials have credited Trump for the progress.

South Korea’s Foreign Minister Kang Kyung-wha told CNN: “Clearly, credit goes to President Trump. … He’s been determined to come to grips with this from day one.”

Trump was able to get Chinese leader Xi Jinping to agree to impose stricter sanctions on the North, severely impacting the North Korea’s economy.

In the first quarter of this year, according to China’s official customs data, total trade between China and North Korea dropped to $483 million, a nearly 60 percent drop from $1.2 billion in the same quarter last year.

Trump himself is expected to meet Kim himself in late May or June to negotiate the North’s complete denuclearization.

During a speech in South Korea in November last year, Trump offered Kim a path forward.

“North Korea is not the paradise your grandfather envisioned. It is a hell that no person deserves,” Trump said. “Yet, despite every crime you have committed against God and man, we’re ready to offer, and we will do that—we will offer a path to a much better future.

In late November, North Korea test-fired an intercontinental ballistic missile, which, according to U.S. Defense Secretary Gen. James Mattis, had the ability to reach any country around the world.

The full range of methods used by the Trump administration to pressure North Korea has not been discussed publicly, but it was revealed last month that CIA Director Mike Pompeo, who is now secretary of state, had already met with Kim in person.

The sharp turn in North Korea’s trajectory, after decades of threats to attack the United States and its allies South Korea and Japan, is a major win for global peace.

A key doctrine of Trump’s presidency is “peace through strength,” in which a credible military threat is used to preserve peace.

In March, Congress passed a federal budget that includes around $700 billion in defense spending, up more than $100 billion from 2016.

U.S. Secretary of State Mike Pompeo said on April 29 that Trump will maintain a “pressure campaign” of harsh sanctions on North Korea until Kim scraps his nuclear weapon program.