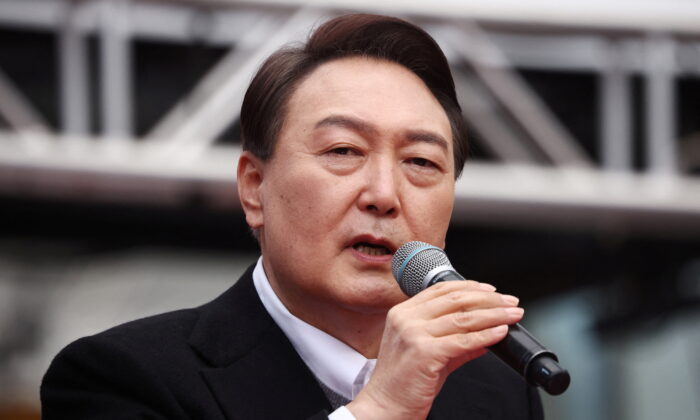 The new president of South Korea said May 10 that he would provide North Korea with what he called “an audacious plan” to strengthen the economy of North Korea’s capital city Pyongyang in exchange for complete denuclearization.

Yoon said in his inauguration speech that North Korea’s resumption of nuclear tests posed a threat to global security, but that “the door to dialogue will remain open so that we can peacefully resolve this threat.”

“If North Korea genuinely embarks on a process to complete denuclearization, we are prepared to work with the international community to present an audacious plan that will vastly strengthen North Korea’s economy and improve the quality of life for its people,” he said.

Yoon added that Pyongyang’s denuclearization “will greatly contribute to bringing lasting peace and prosperity to the Korean Peninsula and beyond.”

During his election campaign, Yoon promised a tougher stance on North Korea and a stronger U.S. security commitment, saying that preemptive strikes may be necessary if Pyongyang shows signs of an imminent attack.

South Korean military officials said on May 7 that Pyongyang fired a submarine-launched ballistic missile (SLBM) into the sea off its east coast from the port city of Sinpo, where North Korea keeps submarines and equipment for test-firing SLBMs.

The launch, North Korea’s 14th missile test of 2022, came three days before Yoon’s inauguration and ahead of his May 21 meeting with U.S. President Joe Biden in Seoul.

Japan also detected the launch and claimed the projectile was a short-range ballistic missile. Japanese Defense Minister Nobuo Kishi said May 10 that it appeared to be the same model as the SBLM Pyongyang tested on Oct. 29, 2021.

On April 26, North Korean leader Kim Jong Un vowed to speed up the development of his country’s nuclear arsenal while overseeing a huge military parade that displayed intercontinental ballistic missiles.

“The nuclear forces of our Republic should be fully prepared to fulfill their responsible mission and put their unique deterrent in motion at any time,” Kim said.

South Korea has been pushing for a formal declaration to end the 1950–53 Korean War to ease tensions on the Korean Peninsula. But North Korea insists that any formal treaty to end the war must first be preceded by an end to U.S. “hostilities” toward Pyongyang. The two countries agreed to an armistice in 1953.

The United States has reiterated that it holds “no hostile intent” toward Pyongyang and expressed willingness to meet with North Korea for negotiations without preconditions.