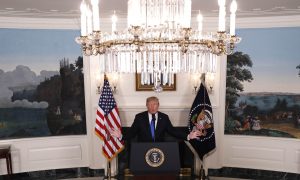 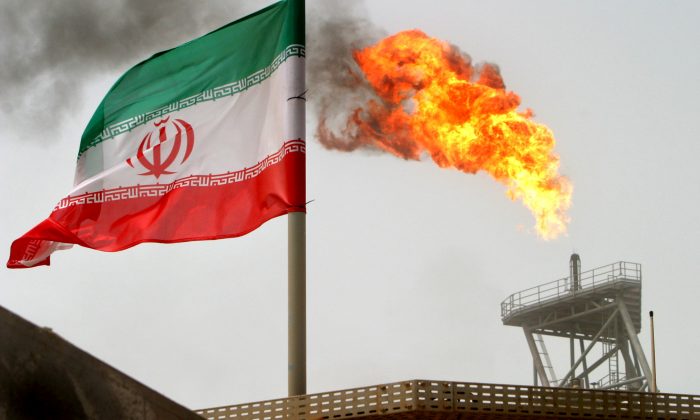 A gas flare on an oil production platform in the Soroush oil fields is seen alongside an Iranian flag in the Gulf on July 25, 2005. (Reuters/Raheb Homavandi/File Photo)
Politics

WASHINGTON—South Korean government officials are expected to press for extending a sanctions waiver on Iran’s petroleum exports that expires in May on a visit to Washington this week.

South Korea’s Deputy Foreign Minister for Economic Affairs Yoon Kang-hyun and other leaders will meet with U.S. State Department officials on March 27 and March 28 to discuss the waiver issued in November to keep buying Iranian oil in exchange for having reduced such purchases, the Seoul government said in a news release on March 25.

The Trump administration has reimposed sanctions on Iran’s oil exports, the lifeblood of its economy, as it seeks to curb Tehran’s nuclear and missile ambitions and its funding of various terrorist groups and militias in the Middle East.

Washington issued sanctions waivers for eight economies in November, including for South Korea, Iran’s fourth largest oil customer in Asia. But the administration has said it wants the exports to go to zero as quickly as possible.

The U.S. goal is to reduce the number of sanctions waivers and to cut Iran’s oil exports about 20 percent, to below 1 million barrels of oil per day from May, sources said this month.

The South Korean officials will meet with the State Department’s top energy diplomat Francis Fannon on March 28. On March 27 they will meet with Brian Hook, the U.S. special representative for Iran, and David Peyman, the deputy assistant secretary of state for counter threat finance and sanctions.

A State Department official, who spoke on condition of anonymity, confirmed the meeting with Peyman. Officials did not immediately respond to requests for comment about the other meetings.

Peyman met with South Korean officials in Asia earlier this month. He offered “to continue to closely consult on the extension of sanctions exemption and Korean companies’ technical issues regarding trade with Iran,” a statement from Seoul’s foreign ministry said at the time.

South Korea is a large buyer of a light oil called condensates from Iran and has told a former U.S. official that there are few options for getting the same quality of condensate from other suppliers.

Yonhap news agency quoted a South Korean official as saying that Seoul has had discussions since November with Washington on gaining an extended exception and that ending the purchases of condensates would affect its economy. “No extension means no imports of Iranian condensate,” an official told Yonhap.