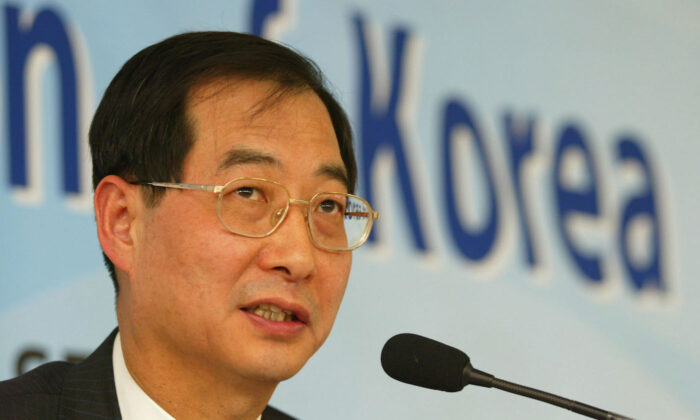 South Korean Prime Minister Han Duck-soo has said it would be a lack of courtesy for the Chinese Communist Party (CCP) to oppose President Yoon Suk-yeol taking part in a NATO summit in Madrid.

“If it is necessary for our security, we should go,” Han told reporters on June 28 during a dinner meeting. “It would be a lack of courtesy for China to say do it or don’t do it. It is not in line with mutual respect.”

Addressing a question on how South Korea should conduct diplomacy with China when the CCP opposes Yoon’s attendance at the NATO summit, Han said that South Korea’s position is very clear⁠—the China-South Korea relationship will be developed on the basis of “mutual benefit and mutual respect.”

“There have been concerns that China may retaliate with economic measures but if the country does so, we should call it out as inappropriate,” Han told reporters. “We shouldn’t discard our principles, which are more important, just to prevent [such retaliatory action].”

He also said he believes that economic retaliation by the CCP against South Korea is unlikely because the division of labor between China and South Korea is very mature.

“Although South Korea relies on China for 25 percent of its exports, we do not think that these export products will be impacted [as a result of the CCP’s dissatisfaction,]” he added.

When asked if South Korea will hold firm to these diplomatic principles if it again suffers retaliation, as it did for deploying the THAAD system, Han replied adamantly: “Of course!”

U.S. National Security Council spokesman John Kirby said of China’s opposition to South Korea’s participation at the upcoming summit, “China doesn’t get a veto on what meetings the South Koreans attend and associate themselves with.

“And this isn’t about an Asian version of NATO,” he said during a June 23 press conference.

Just like the CCP, North Korea has also reacted with hostility to Yoon’s intentions for the NATO summit, accusing the United States of trying to establish “an Asian NATO” and berating South Korea for “holding the dark hand of the United States.”

Pyongyang’s mouthpiece, the Korean Central News Agency, threatened on June 29 that South Korea will suffer a huge loss and face a security crisis if it attends the summit.

Han said that under the Yoon administration, South Korea will show North Korea its deterrence capabilities and be more realistic about the dangers the regime actually poses.

“Sometimes, we will display what we are capable of as deterrence against its nuclear threats … Over the past few years under the previous administration, many were worried about its naive thoughts about peace with North Korea,” Han said. “This administration won’t be the same.”