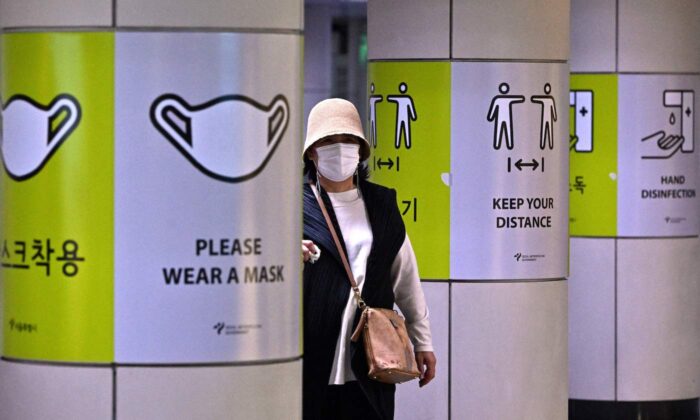 A woman walks past posters showing precautions against the COVID-19 coronavirus at a subway station in Seoul on April 15, 2022. (Jung Yeon-je/AFP via Getty Images)
Asia & Pacific

South Korea to Drop All COVID-19 Rules, but Not Mask Mandate

South Korea will drop all COVID-19 restrictions starting next week as the Omicron-led outbreak begins to recede, but the mask mandate will remain in effect for the time being, Prime Minister Kim Boo-kyum said Friday.

“The Omicron has shown signs of weakening significantly after peaking in the third week of March,” Kim was quoted saying by the Korean Herald.

“As the virus situation is stabilized and capabilities of our medical system are confirmed, the government decided to boldly lift social distancing measures,” he added.

Kim said that the government will scrap the midnight business hour curfew on eateries and the 10-person limit on private gatherings on April 18. Large gatherings, such as rallies and other events, will no longer be restricted in size.

But the indoor mask mandate will remain in effect “for a considerable period of time,” he said.

“With regard to outdoor mask-wearing, which poses a relatively lower risk, we will decide after two weeks based on a review of the virus situation,” Kim remarked.

Travelers entering South Korea will still need to undergo a polymerase chain reaction (PCR) test two days before departure and submit a negative PCR test upon arrival, according to KDCA. All inbound travelers who are fully vaccinated will be exempt from the seven-day quarantine.

The country’s infectious disease level of COVID-19 will be downgraded from a “Class 1 infectious disease” to a “Class 2,” allowing patients to receive treatment at local clinics and hospitals without having to go through a quarantine period.

KDCA stated that the government will push for “a return to the general medical system,” where people can get diagnosis and treatment at local clinics and hospitals while “enjoying everyday life” despite being infected with the virus.

“We have come to fully understand the characteristics of Omicron and equip ourselves with effective weapons like vaccines and treatment,” it added.

The number of infected cases in South Korea appears to have passed its peak after hovering over 620,000 daily in mid-March, with the daily infection rates falling to below 130,000 on Friday.

The government has largely managed to limit deaths and critical cases through widespread vaccinations and scaled back its once-aggressive tracing and containment efforts.

Nearly 87 percent of the country’s 52 million population are fully vaccinated, with 64 percent having received booster shots, according to government data.