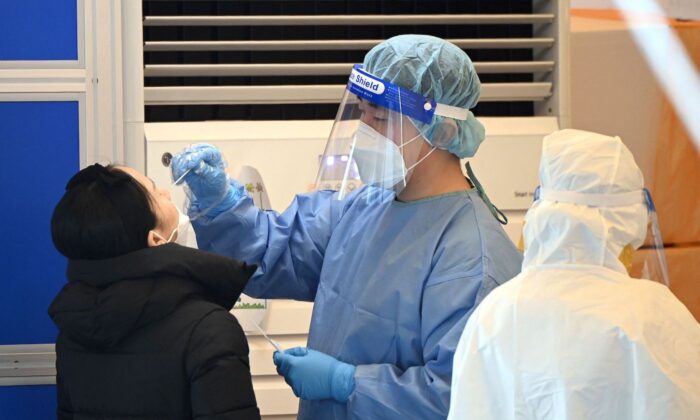 A medical staff takes a nasal swab from a visitor as part of a test for the coronavirus at a virus testing center in Seoul on Dec.14, 2021. (Jung Yeon-Je/AFP via Getty Images)
Asia & Pacific

There were 7,622 new cases reported by the Korea Disease Control and Prevention Agency on Thursday, close to the daily record of 7,850 set a day earlier. That brought the national caseload to 544,117, with nearly 97,000 added in December alone.

At a meeting in Seoul on Thursday, Kim said that social gatherings will be parred down to four fully vaccinated people, while eateries and nightlife establishments will be ordered to close at 9 p.m. from Jan. 2 onwards.

“During this period of standstill, the government will reinforce the stability of our medical responses capabilities,” he remarked while urging people to get booster shots for the virus.

The new restrictions wouldn’t apply to children under the age of 18, Health Minister Kwon Deok-cheol said, adding that movie theaters, concert halls, and private cram schools will have to close at 10 p.m.

A month ago, the Ministry of Health and Welfare’s spokesman, Son Young-Rae, said that breakthrough and severe cases had been concentrated among the elderly, who were among the first to receive the vaccines, necessitating the need to accelerate booster doses.

“The waning effect [of the vaccine’s efficacy] came more quickly than we anticipated,” Son told the media on Nov. 17.

More than 81 percent of the population of over 51 million has been fully vaccinated, but only 17 percent of people have received booster shots.

The government has also tightened the country’s borders after the first five cases of the Omicron variant were detected in South Korea, requiring all inbound travelers to quarantine for at least 10 days, regardless of their nationality or vaccination status.

According to the Korea Disease Control and Prevention Agency (KDCA), the Omicron cases include a couple who arrived from Nigeria on Nov. 24 and a friend who drove them home from the airport. The two other cases were women who also traveled to Nigeria and returned to South Korea on Nov. 23.

The couple who arrived from Nigeria on Nov. 24 was fully vaccinated, but their teenage child and the friend who drove them were unvaccinated, said Choi Seung-ho, a KDCA official. Park Young-joon, another KDCA official, said the four weren’t at that time exhibiting serious illness aside from mild respiratory symptoms or muscle pain.

South Korea had already banned short-term foreign travelers arriving from eight southern African nations, including South Africa, to fend off Omicron, which is seen as potentially more infectious than other versions of the virus.