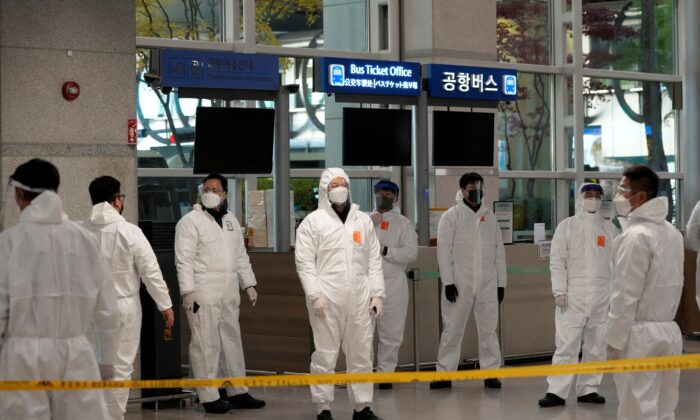 SEOUL, South Korea—South Korea on Wednesday confirmed its first five cases of the new Omicron coronavirus variant in people linked to arrivals from Nigeria, prompting the government to tighten the country’s borders.

The Korea Disease Control and Prevention Agency said Wednesday the cases include a couple who arrived from Nigeria on Nov. 24 and a friend who drove them home from the airport. The two other cases were women who also traveled to Nigeria and returned to South Korea on Nov. 23.

Health workers earlier said they were conducting genetic sequencing tests on a child of the couple and relatives of the man who drove them home to determine whether they were infected.

Following the confirmation of the Omicron infections, South Korea announced it will require all passengers arriving from abroad over the next two weeks to quarantine for at least 10 days, regardless of their nationality or vaccination status.

The country had already banned short-term foreign travelers arriving from eight southern African nations, including South Africa, starting Sunday to fend off Omicron, which is seen as potentially more infectious than other versions of the virus. Officials say the same rules will now be extended to foreigners coming from Nigeria.

The couple who arrived from Nigeria on Nov. 24 was fully vaccinated, but their teenage child and the friend who drove them were unvaccinated, said Choi Seung-ho, a KDCA official. Park Young-joon, another KDCA official, said the four weren’t exhibiting serious illness aside from mild respiratory symptoms or muscle pain.

While Omicron’s emergence has triggered global alarm and forced countries to tighten their borders, scientists say it’s not yet clear whether the variant is more contagious or dangerous than other strains, including the Delta variant.