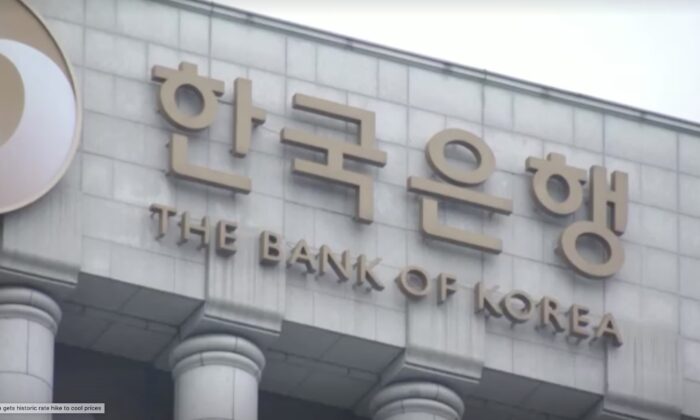 The exterior of the Bank of Korea in Seoul, South Korea in a still from a file video. (Reuters/Screenshot via The Epoch Times)
Inflation

SEOUL—South Korea’s central bank raised its policy interest rate by an unprecedented half point on Wednesday, aiming to pull inflation from 24-year highs while balancing fear of a sharp economic downturn as business activity flounders.

Though 6 percent inflation prompted calls for action, a policy rate widely seen peaking by year-end at 2.75 percent—five times higher than at the onset of the COVID-19 pandemic over two years ago—would pile pressure on the world’s most indebted consumers who are also contending with mortgage rates at nine-year highs.

The Bank of Korea (BOK) raised its benchmark interest rate by 50 basis points to 2.25 percent, the biggest increase since the bank adopted the current policy system in 1999, and coming even as it expects gross domestic product growth “below the May forecast of 2.7 percent.”

Twenty-seven of 32 analysts in a Reuters poll expected the bank to announce a half-point hike, while the remainder expected a quarter-point.

“Considering inflation and economic conditions, though economic downside risk is indeed high, uncertainties remain elevated, and thus the Board sees it as important at this time to curb the spread of inflation expectations through a 50-basis-point rate hike to prevent acceleration of inflation,” the BOK said in a statement.

September futures on three-year treasury bonds rose after the announcement, rising 32 ticks to 104.93 as of 03:35 GMT.

“If the inflation and growth trends do not change significantly, a return to 25-basis-point hikes looks appropriate for the time being,” Governor Rhee Chang-yong told a news conference when asked about another 50-basis-point hike.

“For those vulnerable facing bigger difficulties, we at the central bank will work with the government to look for targeted policy measures to help them,” Rhee also said.

Wednesday’s hike keeps the BOK at the forefront of global monetary tightening as inflation threatens to become entrenched for a resource-poor nation grappling with surging energy prices compounded by the war in Ukraine.

The bigger-than-usual hike comes as other major central banks including the Bank of Canada and Reserve Bank of New Zealand delivered outsized hikes recently, including a third successive half-point hike by the latter on Wednesday.

Most analysts polled this month see South Korea’s rate reaching 2.75 percent by year-end, up from 2.25 percent in the May poll, as the BOK tackles inflation while defending on multiple fronts.

Small business loans classified as “vulnerable”, or at risk of default, rose 30.6 percent from the end of 2019 through March 2022, and the BOK sees the proportion increasing sharply after 2023.

Exports in June grew at their slowest rate in 19 months, the January-June trade deficit set a record, the won is one of the worst performers among emerging markets, and soaring import costs are hurting private consumption which makes up about half of the economy.

“The BOK needs to pay more attention to the household debt situation just as it tries to tame inflation. At the same time, exports are dwindling for this trade-dependent nation,” said Societe Generale economist Oh Suk-tae.

By Cynthia Kim and Jihoon Lee