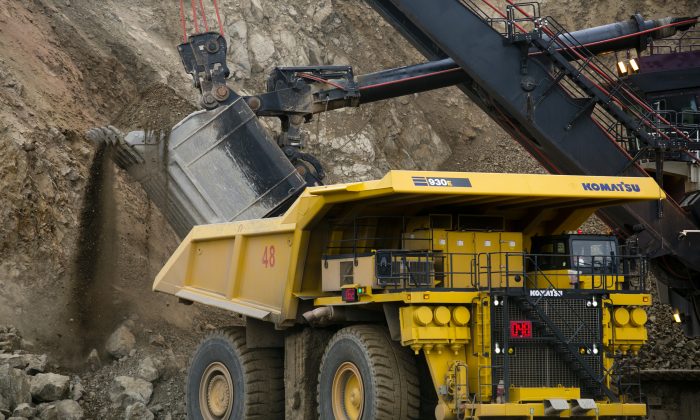 A supersized mining truck is being loaded with ore at the Oyu Tolgoi (Mongolian for Turquoise Hill) open pit copper and gold mine in Mongolia’s Gobi Desert, Oct. 11, 2012. (Paula Bronstein/Getty Images)
Asia & Pacific

South Korea is seeking to strengthen cooperation with mineral-rich Mongolia, to lessen its reliance on China.

The South Korean visit comes amid rising international tensions that include U.S.-China frictions and Russia’s invasion of Ukraine.

“(We) will push actively for measures to cooperate to gain synergies from the combination of South Korea’s infrastructure and such minerals and resources, abundant in Mongolia, as rare earths for high-tech semiconductors and displays, and rare metals for batteries,” Park said during a joint press conference following his Aug. 29 meeting with Battsetseg.

In response, the Mongolian president said “cooperation with South Korea is a top priority for Mongolia.”

Mongolia—located between China and Russia—is one of the top ten resource-rich countries in the world. The country is important in the context of global supply chain restructuring for South Korea.

Since Korea established diplomatic relations with Mongolia in 1990, the two countries have continuously expanded cooperation in the fields of economics, trade, and culture.

The bilateral relationship was upgraded to a “strategic partnership” in 2021.

Presently, the key minerals used by South Korean enterprises such as lithium, cobalt, and graphite mostly come from China.

The move by South Korea with Mongolia is also being seen as a response to the U.S.- Inflation Reduction Act that stipulates that starting in 2023 when tax credits kick in, 40 percent of critical minerals used in car batteries must originate within the United States or from a country that it has a free trade agreement with. This percentage increases every year until 2027 when 80 percent of the critical minerals must meet the requirement.

South Korea is concerned that it won’t be able to enjoy the credits from the United States if it cannot drop its dependence on China. Moreover, the South Koreans are also worried that communist China may weaponize its supply of resources, posing a threat to Korea.

The Bank of Korea’s monthly survey statistics released on June 30 shows that South Korea’s average dependence on China for imports of core minerals such as copper, aluminum, and zinc is as high as 67 percent.

The Korea Chamber of Commerce and Industry also released a report in early August, pointing out that the dependence on imports from China for raw and intermediate materials has increased significantly in the main industry sectors such as batteries and semiconductors. Among them, the imports of two key raw materials for battery manufacturing, lithium oxide, and lithium hydroxide, reached a whopping $1.17 billion in the first half of this year, surpassing 2021’s total imports of $560 million.

According to the statistics of the Korea Trade Association in late August, Korea’s import dependence on China for car battery raw materials has been deepening in recent years, with 64.9 percent of lithium hydroxide imported from China in 2018, rising to 83.8 percent last year, and 84.4 percent from January to July this year. During the same period, cobalt import dependence on China rose from 53.1 percent in 2018 to 64 percent in 2021, then to 81 percent between January and July this year.