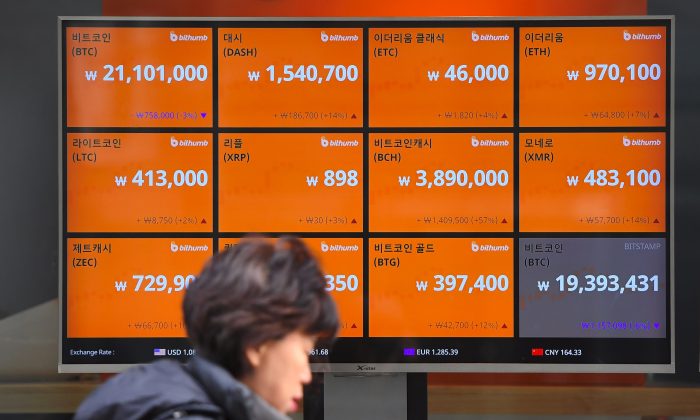 A woman walks past a screen showing exchange rates of cryptocurrencies at an exchange in Seoul on Dec. 20, 2017. A South Korean cryptocurrency exchange shut down on Dec. 19, after losing 17 percent of its assets in a hacking – its second cyberattack this year, with North Korea accused of being behind the first. (JUNG YEON-JE/AFP/Getty Images)
Asia & Pacific

SEOUL–South Korea said on Monday that North Korea last year stole cryptocurrency from the South worth billions of won and that it was still trying to hack into its exchanges.

“North Korea sent emails that could hack into cryptocurrency exchanges and their customers’ private information and stole (cryptocurrency) worth billions of won,” said Kim Byung-kee, a member of South Korea’s parliamentary intelligence committee.

Kim did not disclose which exchanges were hacked.

He added that the country’s spy agency assumed that North Korea was continuously trying to hack into exchanges to steal cryptocurrency and that it was trying its best to prevent further hacking.