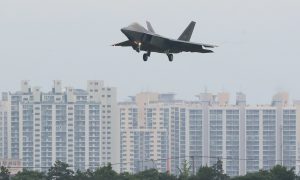 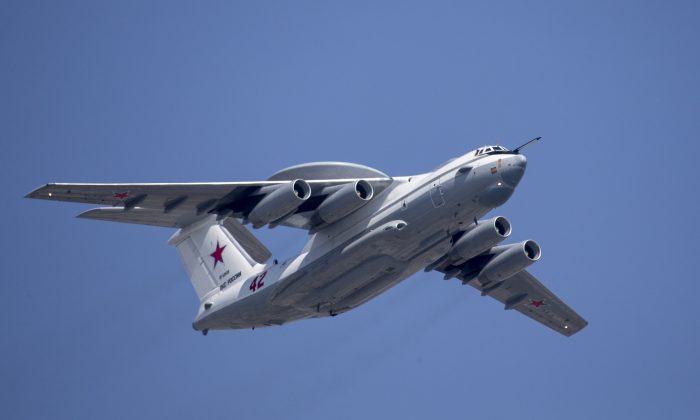 A Russian Beriev A-50 airborne early warning and control training aircraft flies over Red Square during a rehearsal for the Victory Day military parade in Moscow, Russia, on May 7, 2019. (Alexander Zemlianichenko/ AP Photo)
International

South Korea said three Russian military planes—two Tu-95 bombers and one A-50 airborne early warning and control aircraft—entered the South’s air defense identification zone off its east coast before the A-50 intruded in South Korean airspace.

The A-50 entered South Korea’s airspace twice near the islets of Dokdo in the east, officers from the Joint Chiefs of Staff told Yonhap. The plane entered shortly after the bombers entered the country’s zone; South Korean officers said the bombers later trespassed again.

South Korea said it was the first time a foreign military plane had violated South Korean airspace since the end of the 1950-53 Korean War.

Russia disputed the characterization and said two of its Tu-95 bombers were in neutral air space, adding that South Korean pilots carried out “unprofessional maneuvers” when they flew near Russian planes.

“If the Russian pilots felt there was a security threat, they would have responded,” according to a statement from Russia’s Defense Ministry. “It was not for the first time that South Korean pilots tried unsuccessfully to prevent Russian aircraft from flying over the neutral waters of the Sea of ​​Japan,” the ministry said.

According to South Korean government accounts, an unspecified number of South Korean fighter jets, including F-16s, scrambled to the area and fired.

“The Air Force instantly deployed multiple jets, including F-15Ks and F-16Ks, and sent warning messages to it in accordance with operation manuals. But the plane did not respond, so one of our aircraft fired some 10 rounds of flares and 80 warning shots,” a Joint Chiefs of Staff officer told Yonhap.

South Korea’s Foreign Ministry and Joint Chiefs of Staff registered their official protests with Beijing when they summoned China’s ambassador and defense attache.

Chinese Foreign Ministry spokeswoman Hua Chunying said she was not clear about the situation but said the air defense identification zone is not territorial airspace and others are entitled to fly through it.

South Korean officials were examining why the Chinese and Russian aircraft were flying together.

“More analysis is needed for their joint flight, which is quite unusual, as well as their intentions and other details,” a Joint Chief of Staffs officer told Yonhap. The analysis included probing why the Russians and Chinese were conducting joint military drills, if they were doing so.

“While more time is needed to clarify the purpose of these violations, it is the first time that warplanes from the two countries have entered the [zone] at the same time,” the officer said.

Two Chinese warships were near where the warplanes were flying, according to Yonhap. The ships were about 80 nautical miles from Jeju Island.

“In light of Japan’s stance regarding sovereignty over Takeshima, the South Korean military aircraft’s having carried out warning shots is totally unacceptable and extremely regrettable,” Suga told reporters in Tokyo.