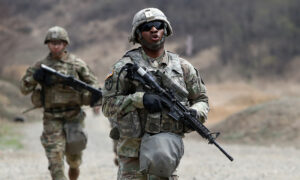 Trump Pushes South Korea to Pay More for US Troops
0 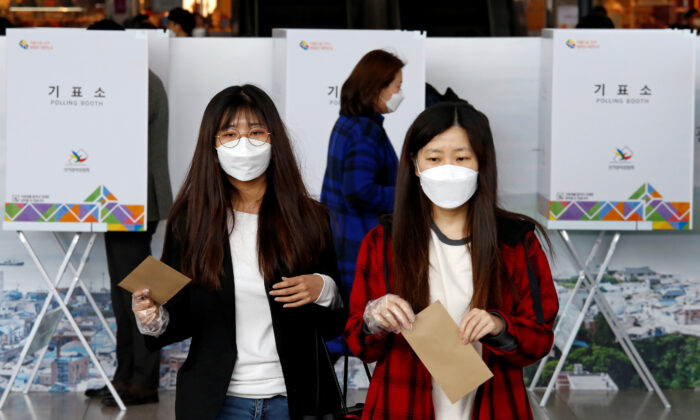 Women wearing masks and plastic gloves to prevent contracting the coronavirus cast their absentee ballots for the parliamentary election at a polling station in Seoul, South Korea, on April 10, 2020. (Heo Ran/Reuters)
Asia & Pacific

SEOUL—South Korean health authorities have concluded no local transmission of COVID-19 occurred from a parliamentary election this month, where authorities took safety measures, including requiring voters to wear masks and plastic gloves when casting ballots.

“Twenty-nine million voters participated in the April 15 parliamentary election … Not one case related to the election has been reported during the 14 days of incubation period,” Yoon Tae-ho, director general for public health policy, told a briefing.

Yoon thanked staff and voters who disinfected polling stations across the country and maintained a 1 metre (40 inch) distance between each other.

Meanwhile in the United States, Speaker of the House Nancy Pelosi (D-Calif.) has clashed with President Donald Trump, saying that she will push for funds in the next COVID-19 relief bill to support mail-in voting at the upcoming general election in November.

“We have to have an important chunk of money in this next bill that will enable us to protect the integrity of our elections, as well as enable the American people to vote-by-mail, especially at this time of a health danger in going to the polls,” Pelosi told MSNBC’s “Morning Joe” program on April 22, referring to the potential risk of contracting COVID-19 by voting in person amid the pandemic.

Democrats and voting rights advocate groups say mail-in balloting is a way to protect voters from the CCP (Chinese Communist Party) virus, commonly known as novel coronavirus They say a failure to guarantee that option amid a pandemic will disenfranchise millions of Americans.

Trump, supported by Republican lawmakers, has challenged the idea of expanding mail-in voting, arguing that it is vulnerable to fraud.

After grappling with the first major outbreak outside China, South Korea has largely managed to bring the outbreak under control without major disruptions with a massive testing campaign and intensive contact tracing.

KCDC reported four new infections, all imported cases, taking the national tally to 10,765. The death toll rose by one to 247, while 9,059 have been discharged.

Of the total, 1,065 were imported cases, where more than 90 percent were Koreans, according to a KCDC statement.

By Sangmi Cha. With additional reporting by Epoch Times staff.