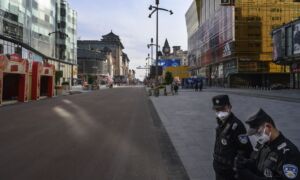 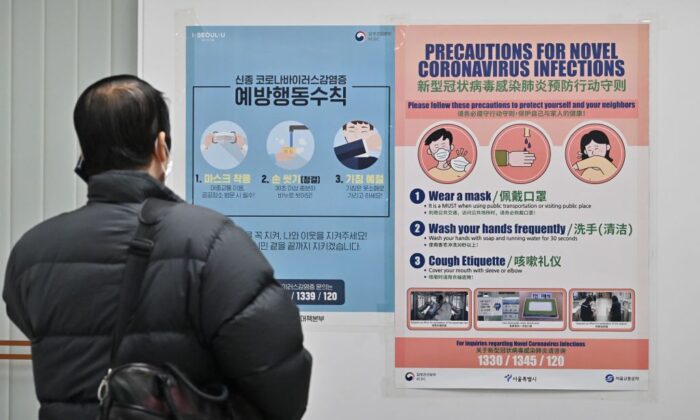 A man wearing a face mask talks on his mobile phone in front of a poster about precautions against the novel coronavirus that originated in central China, at a subway station in Seoul on Feb. 10, 2020. (Jung Yeon-je/AFP via Getty Images)
CCP Virus

A man who had been bedridden at a South Korean hospital for more than 20 years has become the first person in that nation to die from the new coronavirus, as the number of cases in the Asian country nearly doubled.

The 63-year-old man died of pneumonia Feb. 19 at a hospital in Cheongdo, which is located in North Gyeongsang province, local outlet Yonhap News Agency reported Feb. 20, citing the Korea Center for Disease Control and Prevention (KCDC). He tested positive for the COVID-19 virus posthumously. Yonhap didn’t indicate why the man was bedridden.

His death is the ninth COVID-19-related death outside mainland China. There has been one death reported each in France, the Philippines, and Taiwan. There have been two deaths in Hong Kong and three in Japan.

There are 13 other confirmed cases of coronavirus at the same hospital.

Also Feb. 20, KCDC announced 53 new cases—the largest number in a single day since the country reported its first confirmed case of the virus on Jan. 20. South Korea currently has 104 known cases of coronavirus—the highest among countries with confirmed cases outside mainland China.

The South Korean government announced that it will provide 2.5 billion won (about $2 million) in special funds to enhance safety measures in Daegu and North Gyeongsang, according to Yonhap.

Twenty-three of the Daegu and North Gyeongsang cases are believed to be linked to a 61-year-old South Korean woman who tested positive Feb. 18. The woman, a resident in Daegu, has infected about 40 people, most of whom had attended the same church as the woman.

With at least 90 people out of the more than 1,000 who attended the same church showing symptoms of the virus, Daegu Mayor Kwon Young-jin has asked city residents to stay indoors, Reuters reported on Feb. 20.

“We are in an unprecedented crisis,” Kwon told reporters.

All service members who have been to the same church in Daegu since Feb. 9 will be placed under mandatory self-quarantine, while non-essential travel to and from Daegu will be prohibited, and off-installation travel minimized.

The U.S. Centers for Disease Control and Prevention (CDC) has named Japan, Singapore, South Korea, Taiwan, Thailand, and Vietnam as destinations with apparent community spread—meaning that some people are infected without knowing how or where they became infected.

Last month, the CDC issued a Level Three warning for all of China, meaning that Americans should avoid all nonessential travel to China.

A Korean Navy sailor in his 20s on South Korea’s Jeju Island also tested positive for the virus, Yonhap reported Feb. 20, citing government officials. The sailor visited Daegu from Feb. 13 to 18. He began showing symptoms of the virus after returning to his base in Jeju.

It isn’t known if the sailor has been included among the 104 known cases in South Korea.