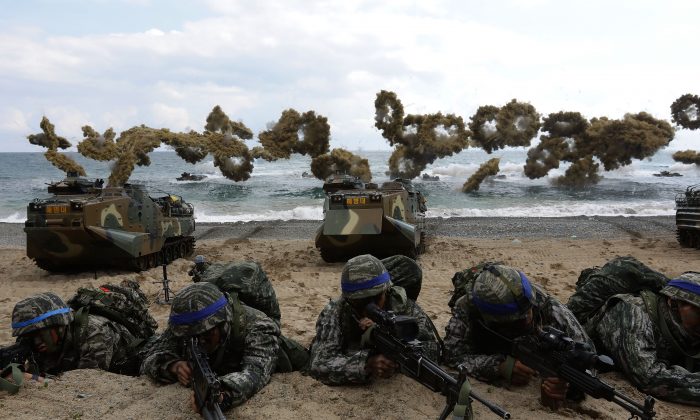 On June 25, 1950, North Korea invaded the south, and its Soviet-supplied army smashed through South Korea’s defense.

Seoul fell within three days, and within five days South Korea’s army was shattered, losing nearly 80 percent of its 95,000 soldiers.

In early July, U.S. forces scrambled over from occupied Japan to help hold the line but also suffered defeat after defeat. Underfunded and undertrained after the demands of World War II, the United States military could not marshal the forces needed to stop the advance of North Korea’s T-34 tanks and determined infantry.

Pushed back ever further towards the southern tip of the Korean Peninsula, Allied forces under United Nations Command only kept a foothold on the eastern corner of the peninsula before managing to stop the North Korean advance.

South Korean and U.N. Command forces managed to hold there during the Battle of Pusan Perimeter from August to September. Turning the tide of the war came soon after. It was sudden and dramatic, the result of a bold amphibious attack on Incheon, a coastal city then deep behind enemy lines and less than 20 miles from Seoul, as the crow flies.

The Battle of Incheon was a lesson in what it takes to win a war on the Korean Peninsula and the key to understanding the crucial strategic advantage South Korea has in a war against North Korea’s communist regime.

In a military contest, flanking the enemy is the ultimate counterattack. Instead of facing them head-on, where they’ve got their weapons aimed, the smart strategist comes from the side or back.

And on the Korean Penninsula, where the North and South face each other over a short but intensely guarded 160-mile border, the opportunities for flanking along the thousands of miles of coastline are endless and essential.

Getting forces from sea to land quickly and in large numbers is critical in any war on the Korean Peninsula and it’s something the South Koreans have been practicing for decades.

In the Battle of Incheon, the United States put 75,000 troops on a little-guarded stretch of treacherous coastline, avoiding the spear-tip of North Korean forces pointed south towards Pusan. Once allied forces gained control of Incheon, they were within striking distance of the supply lines North Korea relied on to keep its invading army fed and fueled as it tried to push allied forces off the Korean Peninsula.

“The United Nations essentially liberated South Korea from invasion with a single amphibious stroke, and the country has maintained a large and powerful Marine Corps ever since,” notes defense and national-security writer Kyle Mizokami in an article for Scout.com.

South Korea’s Marine force is one of the largest in the world and has been training in tandem with U.S. forces for decades.

A decade after the Korean War, during the Vietnam War, South Korea’s Blue Dragon brigade joined American forces to try to push the communists back there as they had in South Korea.

According to military historian Edward Marek, a U.S. Marine colonel at Hoi An, Vietnam, said some years after that war, “We taught them everything we know, and now they know it better than us.”

South Korea has kept its amphibious naval force well trained and reasonably well equipped, giving it offensive options critical to the kind of rapid win required in any war on the Korean Peninsula.

While a longer war would inevitably see North Korea’s malnourished and less-equipped army disintegrated, the threat of nuclear weapons requires a rapid victory, according to Mizokami’s analysis.

“A future war on the Korean Peninsula will be a race against time,” writes Mizokami.