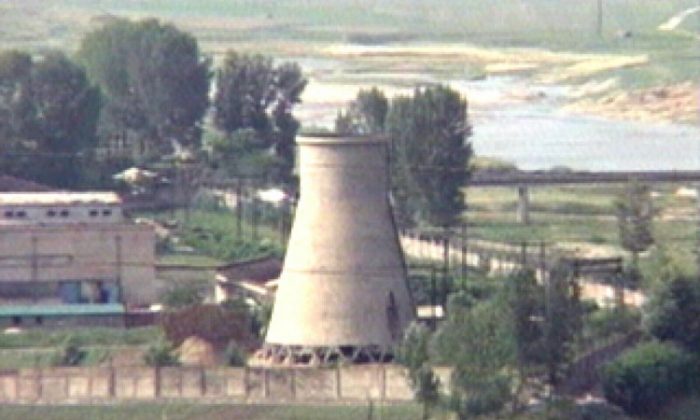 FILE - In this June 27, 2008 file photo from television, the 60-foot-tall cooling tower is seen before its demolition at the main Nyongbyon reactor complex in Nyongbyon, also known as Yongbyon, North Korea. (AP Photo/APTN, File)
Asia & Pacific

SEOUL—South Korean officials began preparations on Friday for a summit next month with North Korea aimed at reducing tensions on the peninsula, as a report showed the North had probably begun testing a nuclear reactor as recently as late February.

The reactor could be used to produce weapons-grade plutonium, but North Korea is believed to already have enough fissile material for multiple nuclear bombs, according to Joshua Pollack, a senior research associate at the Middlebury Institute of International Studies at Monterey.

Meantime, South Korean officials were set to convene their first meeting at the presidential Blue House to prepare for a summit between President Moon Jae-in and North Korean leader Kim Jong Un late next month.

Headed by Moon’s chief of staff Im Jong-seok, former prominent democracy activist, the team will hammer out plans for the summit, including when to contact the North and what will be discussed between Kim and Moon.

U.S. President Donald Trump also accepted a summit invitation from Kim Jong Un, after a South Korean envoy told him earlier this month that the North’s leader was prepared to discuss denuclearization. Trump and Kim are expected to meet sometime in May although a location has not been set yet.

Although North Korea’s state media has yet to comment on the pending summits with Moon and Trump, its foreign minister Ri Yong Ho is visiting Sweden for talks with his Swedish counterpart Margot Wallstrom. Ri’s trip prompted speculation it could lay the groundwork for the summit in Sweden between Trump and Kim Jong Un.

The push for these summits came after the North Korean leader said in a New Year’s address that he wanted to improve relations with the South following a year of heightened tensions brought on by the North’s nuclear and missile tests.

North Korea completed construction of the Yongbyon ELWR in 2013. It was optimized for civilian electricity production, and although it is not yet operational, it could start running with “little warning” later in 2018 or 2019, the Jane’s report said.

The experimental reactor is likely too small to provide much in the way of electricity, but is part of a “long-running effort” to develop a light-water reactor after a deal by an international consortium, including the United States, to provide two such nuclear power reactors in the 1990s fell apart, Pollack said.

“It’s their way of saying, ‘see, since you won’t give us what you promised, we’ll do it ourselves’,” Pollack said. “They haven’t made any agreements lately with the U.S., so the work goes on.”

An official at the South’s defense ministry said authorities were aware of the Jane’s report, which follows a similar one released on the 38 North website earlier this month that said a nearby reactor had also continued to show signs of operation.

The isolated state has maintained it will continue developing its nuclear program but later added it was open to abandoning the program if the security of its regime was guaranteed, according to South Korea.