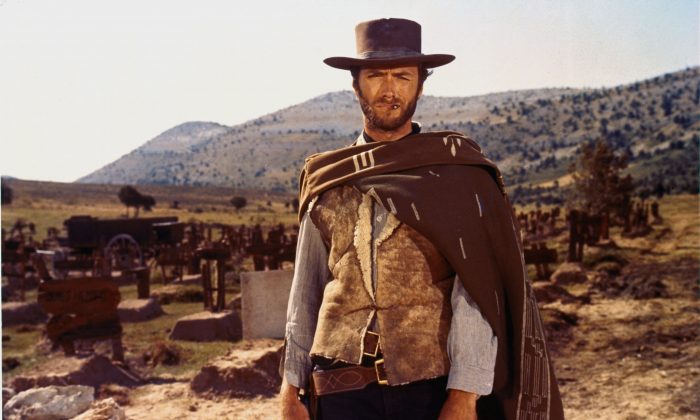 Clint Eastwood, playing the Man With No Name, was launched to the A-List in large part thanks to his role in The Good The Bad and The Ugly. Now the iconic music from the film is being weaponized to taunt North Korea. (United Artists)
Asia & Pacific

South Korea Blasts ‘The Good, The Bad and The Ugly’ Theme Song into North Korea

South Korea has added the theme song to The Good, The Bad and The Ugly to its arsenal of psychological weapons, according to a video obtained by a recent visitor to the demilitarized zone that separates the two countries.

The haunting melody from Sergio Leone’s Spaghetti western helped launch Clint Eastwood to stardom. Now it’s being launched across the demilitarized zone to taunt North Korean soldiers who could be imprisoned or worse if they were caught watching the film.

“The DMZ was definitely the last place I expected to hear Ennio Morricone’s score to #thegoodthebadtheugly blaring out,” tweeted Pierre O’Reilly, a musician who took a video from a tourist stop on the border.

The DMZ was definitely the last place I expected to hear Ennio Morricone’s score to #thegoodthebadtheugly blaring out. #dmz #northkorea #southkorea pic.twitter.com/RV8g78Knad

The iconic song helped fuel tension in the film as Eastwood, playing The Man With No Name, faced off against his rivals in shootouts and staredowns during their pursuit of Confederate gold buried in a cemetery during the American Civil War.

South Korea plays audio recordings denouncing the Kim regime and music with sometimes hilarious undertones as part of its psychological warfare against the North Korean regime.

Another video captures the speakers blaring out Queen’s “We Are The Champions” and its pointed chorus:

South Korea had previously paused its auditory assault but resumed the propaganda broadcasts in January 2016 after North Korea detonated a hydrogen bomb.

South Korean authorities claim the giant camouflaged speakers blare the music and messages up to 15 miles in the dead of night, or just 6 miles during the day, sending their sounds far beyond the 2.5-mile-wide demilitarized zone.

While the music played may sometimes seem humorous, the actual broadcasts are not—they are managed by military personnel who are aware that North Korea has threatened to attack the speakers.

South Korea started the broadcasts in August 2015 when South Korean soldiers were maimed by landmines in the DMZ.

South Korea doesn’t just play thematically appropriate foreign music though. One of the bands most played along the DMZ was South Korean pop band Girl Generation.

The speakers are arranged at 11 locations along the border. Some international observers have said they needlessly raise tensions with North Korea. For others, they are a powerful reminder that information is one of the most dangerous weapons in the hands of the South.

Earlier this month, a high-level North Korean defector told U.S. Congress that North Korea’s mass brainwashing of its citizens could be undone—and the regime toppled—if more outside information and culture could reach North Korean people.

“We now know that the communist systems of the Soviet Union and East European countries crumbled as a result of the dissemination of outside information,” Thae Yong-ho told the House Foreign Affairs Committee in Washington, DC on Nov. 1.

Thae, a former deputy chief at the North Korean embassy in London, said North Koreans are hungry for entertainment programs from outside its heavily guarded borders.

“The Berlin wall would not have easily collapsed if East German people did not regularly watch West German TV,” he said.