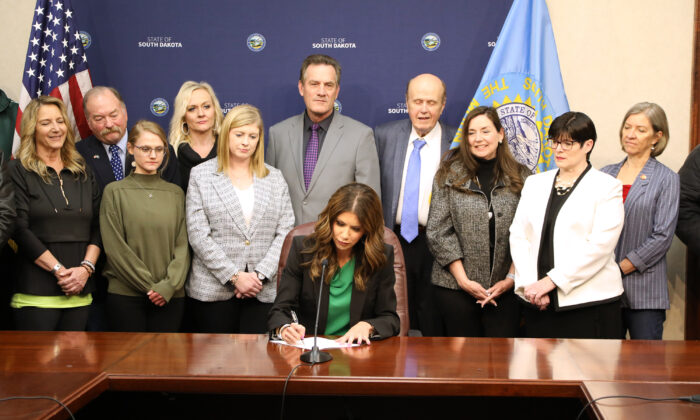 South Dakota Gov. Kristi Noem signs a bill into law banning outside spending on elections, in Pierre, S.D., on March 16, 2022. (Courtesy of the Office of the South Dakota Governor)
Viewpoints

The successes of South Dakota are the result of a strong Republican Party.

The South Dakota state GOP convention was held on June 23–25 in Watertown, South Dakota. By Saturday, there were over 600 delegates registered and certified from 59 of South Dakota’s 66 counties. The main convention organizer was Dan Lederman, the state GOP chairman; the convention host, chairman, and facilitator was Ried Holien, mayor of Watertown.

While there were no official themes for the convention, unofficially the focus included: 1) a celebration of the Roe v. Wade decision, including praise for former President Donald Trump’s nominations of U.S. Supreme Court Justices Neil Gorsuch, Brett Kavanaugh, and Amy Coney Barrett, without which the decision would have been impossible; 2) the example set by the state during the pandemic, including no lockdowns or mandates, less than 2 percent unemployment, ranked number two on the list of top moving destinations in 2021, record tourism in 2021 and continuing this year, and continued business expansion across the state; 3) the positive results of adherence to Republican principles of low taxes and regulations and personal and economic freedoms; 4) concerns about election integrity, as expressed by some elected officials and many delegates; and 5) the need to fight against the Biden administration’s continuing authoritarian encroachment on state and individual rights, including red flag laws, land grabs, and unlawful federal mandates.

On Thursday, the primary focus was on establishing the rules of the convention, which were debated and voted upon in an open forum. Committee meetings were held to address the state GOP platform, proposed resolutions, election training, and site selection for future conventions.

Thursday also included an after-hours BBQ at a local resort that featured a keynote speech by Ronna McDaniel, chairwoman of the Republican National Committee. She echoed many of the unofficial themes above, particularly the shining example of the state under the leadership of Gov. Kristi Noem.

The day’s first event was a breakfast speech by South Dakota’s lone U.S. representative, Dusty Johnson. He discussed Republican principles, efforts to thwart House Speaker Nancy Pelosi and the Democrats, and the expectation of great things if the Republicans win the majority in November.

The general session on Friday focused on debating, modifying, and approving the party platform and the proposed resolutions. From the platform, these are the key principles of the South Dakota Republican Party that were approved at the convention:

Individual Liberty: The rights of American citizens proceed from God, not the government. Government authority proceeds only from the consent of the people. Individuals, including the unborn, have the intrinsic right to life, liberty, and the pursuit of happiness. We affirm the sanctity of all human life.

Limited Government: Federal, state, and local governments should be transparent and limited to their respective roles as essential to inherently governmental functions.

Personal Responsibility: Individuals and families are responsible for their behavior. Public policy should encourage and empower their efforts to provide for their own health, safety, education, moral fortitude, and personal wealth.

Property Rights: We support private property rights as guaranteed by the Fifth Amendment to the U.S. Constitution.

Tribal Relations: We believe the best interests of all South Dakota citizens will result from working cooperatively with tribal governments.

Peace Through Strength and Rule of Law: National security, national sovereignty, public safety, the right to self-defense, the rule of constitutional and statutory law, and civil justice should be preserved without excessive undue burden on civil liberty.

Eight resolutions were debated and approved, including a resolution thanking Trump, a resolution expressing strong support for the reelection of Noem, Johnson, and Sen. John Thune, and a resolution affirming the sanctity of life.

Friday also included a “John Thune luncheon,” during which the senator gave a speech that explained how the Republican minority in the Senate has prevented truly disastrous proposed Democrat legislation from being passed, including the federalization of voting laws and the Biden administration’s Build Back Better initiative.

Of course, there was no mention of the Republican failure to stop the passage of the gun control law signed by President Joe Biden on Saturday that many people, such as Rep. Jim Jordan (R-Ohio), consider unconstitutional.

Saturday was devoted to nominating and electing Republican candidates for down-ballot statewide offices. A main responsibility of the state convention is to screen and nominate candidates for whom no party primaries are held, including lieutenant governor, attorney general, secretary of state, state auditor, state treasurer, chairman of the state public utilities commission, and commissioner of schools and public lands.

Once elected by delegates at the convention, these people become the Republican candidates for those offices during the general election in November.

These candidates were unopposed and elected by acclamation:

The results for the contested elections were as follows:

Differences were debated emotionally in some cases but without rancor. Despite those differences, unity prevailed as the attendees dispersed.

Much of the discussions centered on ensuring election integrity and the moral dilemma presented to Democrats surrounding the repeal of Roe v. Wade, including opportunities to convert pro-life Democrats to the Republican Party. Many delegates were already aggressively working toward that end on registered Democrats and independents in their various circles of family, friends, colleagues, and neighbors.

Election integrity was also a hot topic, especially among the delegates. Those who had seen the documentary “2000 Mules” were particularly incensed about the need to ensure election integrity in South Dakota, including scrubbing voter registration rolls in all counties.

Lastly, this author attended the convention as a delegate and precinct committeeman.