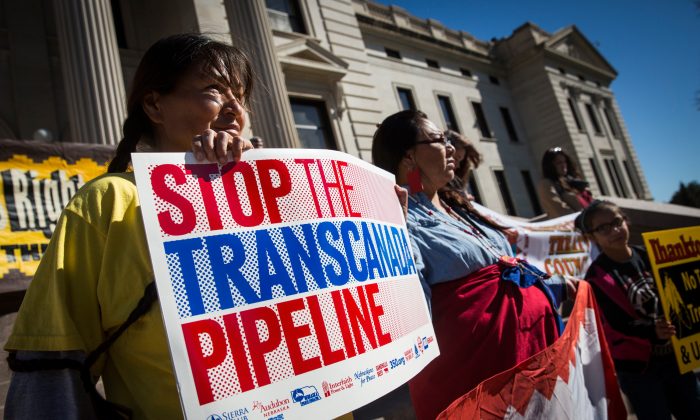 PIERRE, SD - OCTOBER 13: People participate in a protest against the proposed Keystone XL pipeline on October 13, 2014 in Pierre, South Dakota. Numerous Native American tribes, ranchers, politicians and people against the pipeline came together to hold a rally on the steps of the state's capital building. (Photo by Andrew Burton/Getty Images)
US

PIERRE, S.D.—South Dakota regulators are deciding whether to approve construction of a proposed $3.8 billion pipeline that would move oil from western North Dakota’s Bakken oil patch.

South Dakota’s Public Utilities Commission on Tuesday is beginning a two-week hearing on whether to permit the Dakota Access Pipeline, which would move at least 450,000 barrels of North Dakota crude daily through South Dakota and Iowa to an existing pipeline in Patoka, Illinois, where shippers can access Midwest and Gulf Coast markets.

About 270 miles of the 1,130-mile pipeline would be in eastern South Dakota, where some landowners have environmental concerns.

Opponents have placed seven billboards and signs throughout Lincoln and Minnehaha counties at locations under which the pipeline would run, in hopes of making the public aware of the pipeline’s proximity to population centers and eastern South Dakota’s productive cropland.

Dallas-based Energy Transfer Partners has said the project will create up to 12,000 temporary jobs for welders, mechanics, pipefitters and heavy equipment operators, pumping hundreds of millions of dollars into local economies. Construction companies in South Dakota have filed letters of support with the state.

The project also needs approval from regulators in North Dakota, Iowa, and Illinois. Energy Transfer Partners already has the shipping commitments it needs from oil producers and hopes to have the pipeline running late next year.