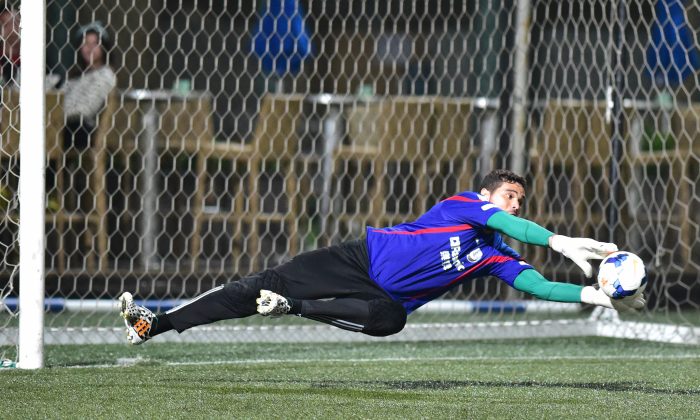 The Premier League standings are led by Sun Pegasus, with 16-points from 7-matches, South China’s win moving them to second place with 11 points from 6 matches, and Kitchee and Eastern are joint third with 10 points each, from 4 and 5 matches respectively.

Weekend action was given over to the Canbo Senior Shield Quarter Finals, 2-matches being played on Saturday and Sunday. The first game played on Saturday (Nov. 29) involved an unexpected result when Wong Tai Sin ran out 3-1 winners against favorites Sun Pegasus. Wong Tsz-ho opened the scoring for Wong Tai Sin before Igor Miovic equalised for Sun Pegasus just before half time. However,a quick double from Alessandro Ferreira Leonardo from a penalty and another strike in the 47th and 50th minutes sealed the win for Wong Tai Sin.

In the other Saturday game played at Tsing Yi Sports Ground, Kitchee were the eventual 3-2 winners against Wofoo Tai Po.

Wofoo Tai Po took the early lead in the 6th minute when Lam Ngai-tung converted Aendar Naves’ cross. Kitchee equalised after 33 minutes when Jorge Tarres converted a penalty, and went into the half-time break at 1-all.

Wofoo Tai Po again took the lead after 50 minutes when Chan Yuk-chi headed into the net after goalkeeper Weng Zhenpeng failed to hold Vincent Weihjl’s free kick. Kitchee equalised again in the 61st minute when Paulo Carreiro headed in Lo Kwan-yee’s cross, and scored what proved to be the winning goal in the 70th minute when Jorge Tarres scored his second from a rebound after his first shot had been blocked.

In Sunday’s (Nov. 30) first game, South China won 4-1 against BC Rangers in a game played at Mongkok Stadium.

After the first half had ended in a nil-all stalemate, South China opened the scoring after 50 minutes when Andrew Russell scored with a far post header from Yuto Nakamura’s corner. Nakamura doubled South China’s lead after 62 minutes when he curled a shot past the goalkeeper. South China added a third in the 64th minute when Ivan Kostopoulos scored from Yuto Nakamura’s corner, and added their fourth in the 74th minute when Michael Cheng scored from Sean Tse’s pass.

BC Rangers reduced the deficit in the 78th minute when Lam Hok-hei headed in, but South China moved into the semi-finals.

In the other Sunday game held at Tsing Yi Sports Ground, Eastern were 2-nil victors against YFCMD, opening the scoring after 28 minutes when Roberto Afonso scored after Michael Luk’s free kick into the penalty box, and added a second goal after 69 minutes when Leung Tsz-chun direct from a free kick.

HKFC now lead the table on 32 points, with Metro Gallery Sun Source second on 29 points with 2-games in hand, and Shatin third on 26 points with one game in hand on the leaders.

Wing Yee now lead the 2nd division table on 28 points, followed by Mutual on 22 points, Kowloon City on 21 points, and Kwong Wah on 20 points, but with a game in hand on each of those above them.

Tung Sing now lead the division on 34 points ahead of Central &Western on 26 points, and Fukien and Islands on 25 points.

Yau Yee League
In the Yau Yee League first division matches, Wanderers were beaten 1-2 by Swiss XI, USRC were 1-nil victors against Albion, The Store House Squadron drew 2-all with Corinthians, KCC Dragons drew 4-all against GAS, Colts were 4-1 victors over French Kiss, and Boca Seniors were 2-1 winners against Baker Tilly Spartans.

In the first game at Sports Road, Wanderers wasted a good chance after 20 minutes against Swiss XI when Christophe Saune shot wide with only the goalkeeper Hironori Ono to beat, and were made to pay in the 29th minute, when Michael Daniel headed a corner from the left wing into the bottom left hand corner of the net, unchallenged from the six yard box. Wanderers equalised after 35 minutes when Danny Beattie chipped a ball down the left hand side of the pitch into the corner of the penalty box, where Simon Galvin sped onto the ball and headed it forward towards the corner of the six yard box, and then calmly chipped it over stranded goalkeeper Ono and into the right hand corner of the net. After the first half ended tied at 1-all, a free kick was conceded in the second minute of the second half around 25 yards out and a little to the right of the right hand post. Peter Martisek hit a curling left footed shot over the wall and just inside the right hand post. Saune had a good chance to equalise for Wanderers after 55 minutes when put through into the penalty box for a one-on-one with keeper Ono, only to lift his shot over the bar.

In a hard fought second game between two of the championship contenders, USRC ran out winners in a close fought game against Albion, scoring the only goal of the game just prior to the half-time break.

USRC now lead the table on 24 points, with Albion and Wanderers on 22 points, KCC Dragons are fourth on 21 points, and GAS in fifth place on 19 points.

HKDC Mobsters and HKU70’s are now joint leaders on 26 points.

Third Division
In the third division, University were 2-nil victors over Yan Po, IES won 4-1 against CAPS, HOB drew 1-all with Goal Visio, HKUSA were 5-1 winners against Dynamo, and Green Cypress FC drew 1-all with Scorpions.

University now head the table on 29 points, with IES second on 28 points.

Power 22 now lead the table on 29 points, ahead of second placed HKSS on 28 points.