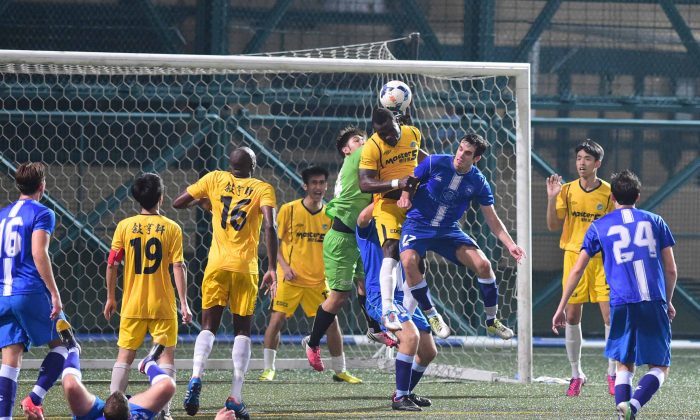 Saturday (March 21) saw the League Cup semi-final game between South China and Sun Pegasus played at Mongkok Stadium. Sun Pegasus took the lead in the first half through a goal from Jaimes Mckee, but South China equalised through Chan Siu-ki in the 70th minute, before grabbing a late winner from Yuto Nakamura to seal their place in the final.

Sunday’s (March 22) other semi-final featured Kitchee taking on Wong Tai Sin, also at Mongkok Stadium, with the game being settled in the 37th minute when Li Kwan-yee was fed by Lam Ka-wai before firing past goalkeeper Tsang Man-fai. Wong Tai Sin’s task was made difficult after Wong King-wa was sent off in the 24th minute for a foul on Paulo Carreira.

Saturday saw the top of the table first division clash between HKFC and Metro Gallery Sun Source at Sports Road. HKFC took the lead in the 5th minute through a finish from Robbie Bacon. However Metro Gallery Sun Source equalised in the 25th minute when a through ball down the right hand side saw the centre forward outpace the defence and strike past goalkeeper Rudolf Hollaender. HKFC again took the lead in the 41st minute when John Ramage headed into the top left-hand corner of the net for a 2-1 half-time lead.

Metro Gallery Sun Source now lead the first division table with 54 points, with HKFC second with 50 points, Yau Tsim Mong third on 42 points, and Southern fourth on 41 points—the 2 leaders having played 20 games, and the others one less.

Wing Yee now head the second division after 18 matches with 47 points, Mutual are second with 38 points, and Kowloon City are third with 35 points having played one game less.

Tung Sing now lead the division with 53 points from 20 matches, with Central & Western district second with 48 points from the same number of matches.

Yau Yee League
Sunday saw the first division derby clash between club rivals Albion, the current joint leaders, and fourth placed Wanderers at Sports Road. In a close first half, neither side troubled the opposition goalkeeper, and the only strike came from Albion’s Jan Souleyman, where he hit the upright in the 11th minute. Albion started to increase the pressure in the second half, and Wanderers goalkeeper James Seddon was force to make some good saves to keep the scores equal. However, Albion broke the deadlock in the 60th minute, when a ball into the box saw Seun Tunde Olokigbe head the ball down before Fouad Ben Allal struck the ball past James Seddon from the edge of the box into the net. Albion sealed the game in the 77th minute when Edouard Caumon chipped into the Wanderers net from 10 yards after a dribble from Jan Souleyman, and a final 2-nil win for Albion.

Albion now lead the first division table with 42 points from 19 matches, with KCC Dragons second on 39 points, USRC third on 38 points, and Wanderers fourth on 36 points. With 3 rounds remaining, Albion are current favourites for the title.

In second division games HKDC Mobsters were 2-1 victors over SFALO Oxford, Interglobal Colloids won 5-1 against GGFC, Antonhill won 4-1 against CSOB, HKU70’s won 2-1 against KCC Knights, ANP drew 1-all with Azzurri, and The Store House Hearts were 1-nil victors over WYFC06.

HKDC Mobsters lead the second division with 44 points from 19 games, with HKU70’s second with 42 points.

IES now lead the third division with 48 points from 19 games, with University second with 47 points from the same number of games.

In the fourth division, Power 22 won 5-2 against Skyline, Hung Art won 1-nil against Rising Sun, Grasshoppers were 6-1 victors over Bapcoll, Youth Coaches were 5-2 winners against WYFC84, and HKSS won 3-nil against Friends of Barclays.

HKSS and Power 22 lead the fourth division with 46 points from 19 games, with Grasshoppers third with 41 points from 18 games.