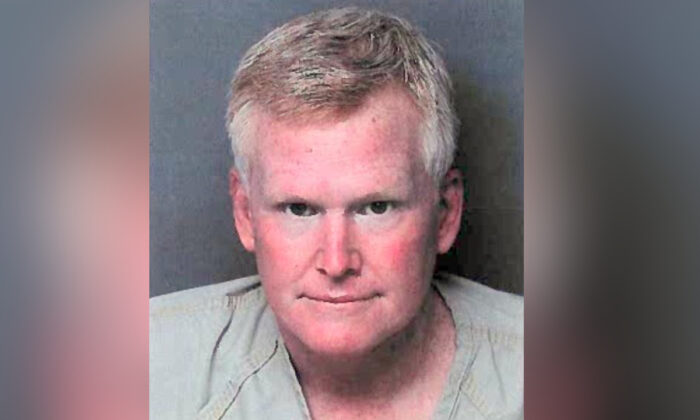 South Carolina lawyer Alex Murdaugh was arrested Thursday in South Carolina on charges including insurance fraud after he told state agents that he conspired with another man to commit suicide so his son would get $10 million from a life insurance policy.

The arrest came a day after authorities announced the arrest of Curtis Edward Smith, 61. Court documents say Smith and Murdaugh admitted to hatching a scheme that centered on Smith shooting Murdaugh dead.

But the shot Smith fired only grazed Murdaugh’s head, leaving him alive. He was rushed to the hospital and survived.

“I can assure you that SLED agents will continue working to bring justice to anyone involved with any criminal act associated with these ongoing investigations,” SLED Chief Mark Keel said in a statement. “The arrests in this case are only the first step in that process.”

Murdaugh was booked at the Hampton County Detention Center.

Murdaugh originally told authorities that he was shot on the side of the road by a stranger after pulling over.

Attorneys representing Murdaugh told The Epoch Times in an email that he suffers from an opioid addiction and that people “took advantage of his addiction and his ability to pay substantial funds for illegal drugs.”

“One of those individuals took advantage of his mental illness and agreed to take Alex’s life, by shooting him in the head. Fortunately, Alex was not killed by the gunshot wound. Alex is fully cooperating with SLED in their investigations into his shooting, opioid use, and the search to find the person or people responsible for the murder of his wife and son. Alex is not without fault but he is just one of many whose life has been devastated by opioid addiction,” the lawyers said.

Smith was a former client of Murdaugh’s, according to court records.

Dick Harpootlian, one of Murdaugh’s attorneys, said on NBC’s “Today” show this week that Murdaugh informed his legal team of what he did and that the team then went to the authorities.

“He believed that $10 million policy had a suicide exclusion,” Harpootlian said. “Suicide exclusions are only good for two years, and he didn’t realize that. So he arranged to have this guy shoot him.”

Murdaugh’s wife and one of his sons were found murdered in June on one of the family’s properties. Authorities are still investigating the murders, as well as allegations that Murdaugh stole money from the law firm he recently resigned from.

SLED on Wednesday said it was opening yet another probe, into the death of Gloria Satterfield.

Satterfield was Murdaugh’s housekeeper when she died on Feb. 26, 2018. Her death had been blamed before on injuries sustained in a “trip and fall accident,” the Hampton County, South Carolina coroner told Keel in a recent letter.

The coroner asked for an investigation because she said the death wasn’t reported to her at the time, nor was an autopsy performed.

Eric Bland, who is representing Satterfield’s estate, said on CNN that Murdaugh was the one who blamed the housekeeper’s death on an accident.

He “told the story of that she had tripped and fell down the stairs over his dogs,” said Bland, who filed a lawsuit on behalf of the estate against Murdaugh.