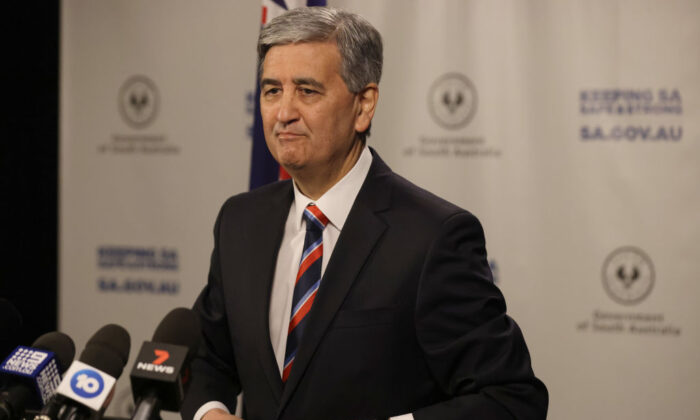 South Australian (SA) Treasurer Rob Lucas has called Labor’s policies in the lead-up to the March election a “reckless spending spree”, saying SA families and businesses would end up paying for it.

According to Lucas, Labor Leader Peter Malinauskas has refused to disclose how he will pay for all the promises, which Lucas says have now come to $3 billion, warning that Labor’s “unprecedented level of spending is now the single biggest risk to our state’s finances and our economic recovery as we emerge from the global pandemic.”

Among the Labor pledges on Lucas’s list is $945 million on health—primarily to fix the ambulance ramping crisis— $593 on a hydrogen plant, $400 million on universal preschool for 3-year-old, $300 million to remove land tax aggregation; $205 million on five technical colleges, and free rapid antigen tests (RATs), which is uncosted, but believed to be in the hundreds of millions.

“SA families and businesses are not stupid—they know if you promise billions in extra spending and at the same time promise to keep budget surpluses, then the only possible result is they pay much more through either increased taxes, charges, levies or other decisions which increase costs to them,” Lucas said.

“In fact, Labor’s reckless pre-election spending spree is of a scale and magnitude I’ve never seen before from an Opposition in my forty years in Parliament.”

While Malinauskas has made it clear he would fund Labor’s health policies by scrapping Liberal’s proposed $662 million Riverbank Arena project, Lucas argued that the Government has only budgeted $79 million until 2025 to be spent on the arena.

Lucas also said that given Labor’s promise—made on radio Fiveaa in February—that they would match government budget surpluses from 2023, it’s clear that Labor will have to increase taxes, charges, levies, or government revenue in some way.

However, Malinauskas has already said that he will not introduce new taxes if he is elected Premier.

The Advertiser reported that during a speech at a  business lunch in November 2021, he stated, “I want to make a clear pledge to the people of South Australia, under a Labor Government under my leadership, there will be no new taxes,” adding that “Unlike the Liberals, under Labor, there will be no surprise changes to tax policy.”

Malinauskas had accused Steven Marshall of introducing a range of tax hikes that surpassed the inflation rate, despite gaining the top job on the promise of lower costs.

A Labor spokesperson told the Epoch Times on Tuesday that “Peter has committed to not raise any taxes as part of his policy platform.”

In terms of how Labor’s promises will be funded, other than the $662 million made available by scrapping the Riverbank Arena, the Opposition Leader’s office said the costings, including sources of funding, will be revealed in the week prior to the election, as is traditionally done.