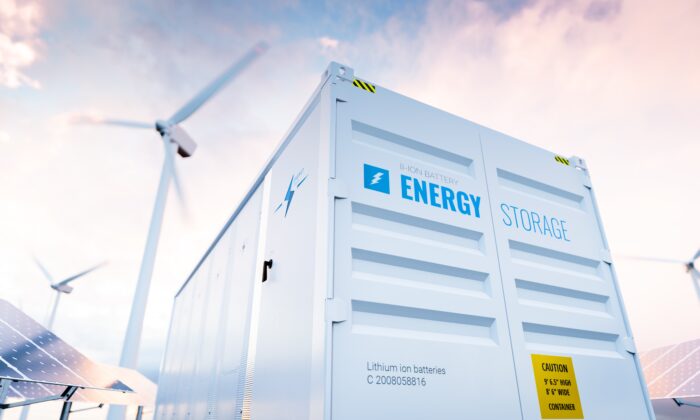 Wind and solar power generation in South Australia (SA) has exceeded demand at some moments in the day as the state prepares to add its biggest battery yet to a growing energy storage arsenal.

SA saw over 130 percent of energy demand met solely by wind on Friday at 2:25 a.m., which was a new state record. Together, wind and solar also regularly exceeded 100 percent at certain moments in the day throughout the week.

To aid in the state’s renewable energy drive, Maoneng Australia has been given the green light for the development of a $150 million big battery located 22 kilometres outside Adelaide in Gould Creek.

Minister for Trade and Investment Stephen Patterson welcomed the project which will be the biggest energy storage system in SA.

It will be capable of supplying 225 MW (megawatts) power to support 40,000 homes for a maximum of two hours.

“South Australia’s reputation as Australia’s leader in renewable energy investment and our credentials of producing around 60 percent of our energy capacity from renewable sources, is helping to attract further investment into our state and creating jobs,” Patterson said in a media release.

“This is a significant investment by Maoneng Australia into South Australia’s continuing commitment towards a sustainable future and I’m delighted to see an Australian-owned company that is so committed to the development of projects that are critical for powering a sustainable world.”

The project is due to reach completion at the end of 2023 after an estimated 12 months in development, attracting 140 to 160 construction jobs.

Australia’s transition to more renewable energy generation has highlighted the need for energy storage to support the nation’s intermittent solar and wind generation.

“This approval is good news for all South Australians, as more battery storage will help smooth the transition to clean energy,” Zhou said in a media release.

“South Australia has high levels of renewable energy generation, which is a positive development but can create challenges balancing supply and demand due to the intermittency of renewables.”

In particular, renewable energy generation is incapable of solely sustaining SA’s energy needs, with the state last month seeing renewable generation occasionally drop to under 10 percent, whereby the state was forced to ramp up its gas-fired stations and pull power from interstate.

“Our proposed battery storage will help manage this, supporting local energy reliability and security while also promoting greater uptake of renewables as a whole.”