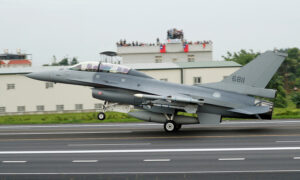 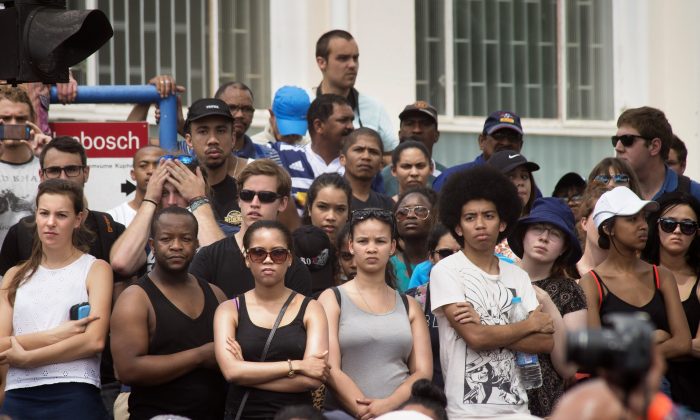 Students from Stellenbosch University protest against fee hikes, through the center of town, in Stellenbosch, on Oct. 23, 2015. (Rodger Bosch/AFP/Getty Images)
Opinion

As student unrest sweeps South Africa, the debate and discourse laid out in youthful pronouncements and Twitter feeds is increasingly racist. An old enemy has been brought back from the dead, and the “vampire” of white racism is now apparently seen as the cause of the country’s myriad problems.

It seems that South Africa’s educated young people cannot bring themselves to trust Julius Malema‘s crude leftist opposition to the ANC, and they certainly see the Democratic Alliance (DA), even under Mmusi Maimane‘s leadership, as a front for white liberal interests. The still-vanishingly small number of black professors at the University of Cape Town, the old white liberal bastion, is taken as evidence of that.

But this new generation of articulate, well-schooled protesters seems strangely unmotivated to rail against the tired, self-serving crony politics of Jacob Zuma and the ANC—calcified, corrupt forces who no longer have anything to offer South Africa.

These young antagonists against all things white crib their soundbites from Steve Biko and Frantz Fanon, but few really seem to have bothered reading their writings in depth. (Try condensing Fanon’s “Black Skin, White Masks” into a tweet.)

The result is that for all its nods to great post-colonial and liberation thinkers, the debate in South Africa is about as sophisticated as that in the American presidential election or the U.K.’s EU referendum campaign. It’s become little more than a hateful, trash-talking exchange of misapprehensions and fictions.

The debate in South Africa is about as sophisticated as that in the American presidential election; it’s little more than a hateful, trash-talking exchange of misapprehensions and fictions.

Everyone forgets, for instance, that white former DA leader Helen Zille was once a courageous young journalist who investigated and broke the story that Biko’s death had in fact been a police murder. Or that Biko’s lover, professor Mamphela Ramphele, had been vice-chancellor of the University of Cape Town.

Or that it’s a black president, Jacob Zuma, who has brought the country to its knees by having no technocratic capacity, or instinct, at all. His power has been sustained via the internal favor-trading and privilege structures of the ANC; history will judge him as a disaster.

In the midst of all this, the death earlier this year, at age 66, of David “Oom Bolo” Meyers, a community activist in Kliptown, Soweto, went unnoticed.

Bolo was a photographer whose work documented Kliptown as it was during the liberation struggle. Back then it was a ghetto of knifemen and gangsters, and in many ways it’s largely unchanged today.

While the ANC has plonked down dozens of chemical toilets, people live much as they did in the days when Mandela and the activists chose Kliptown as a hiding place from the police, and as it was in 1955, when the Freedom Charter was signed by delegates who had smuggled themselves to the township from all over South Africa.

People who are now aged and wizened threw themselves in front of the police to stop them from arresting Mandela, as well as the leaders not just of the ANC but many community organizations. They later used to gather at “Bolo’s place,” an improvised community center, to tell stories through which they relived the exploits and sufferings of 1955 and of the 1976 Soweto Uprising.

None of the young student activists know these stories. Theirs is a simple enemy that can be fought in soundbites and by burning down parts of the universities that should propel them forward—even as the stagnant economy leaves them with little to be propelled into.

I myself am mourning Bolo, who just decided to adopt me as I observed South African elections from the poorest parts of the great cities. His nickname was filched from the Bruce Lee movie “Enter the Dragon,” and as he strode the dirt-poor streets of Kliptown, people of all ages would sing it out in greeting. At the last elections in 2014, he walked me around the polling booths, shaking hands with Malema’s frontline activists in their red berets and DA supporters in their blue ones. (Kliptown is DA territory, the voters having rejected the ANC.)

The country’s youth, armed with a selective reading of history, are failing to hold the ANC accountable or to honor the heroes of the liberation struggle as they presumably want to.

He told me stories about the signing of the 1955 Freedom Charter, at which 3,000 delegates were fed by a Jewish butcher and Chinese greengrocers. There was once an inclusivity in struggle; today, young South Africans issue their anti-vampire tweets while the greedy old men in power posture as the guardians of history, rather than the political zombies they clearly are.

To be fair to the angry young students, if there’s one part of South African society very noticeably keeping its head down, even boorishly getting in the way, it is the white part. But the country’s youth, armed with a selective reading of history, are failing to hold the ANC accountable—or to honor the heroes of the liberation struggle as they presumably want to.