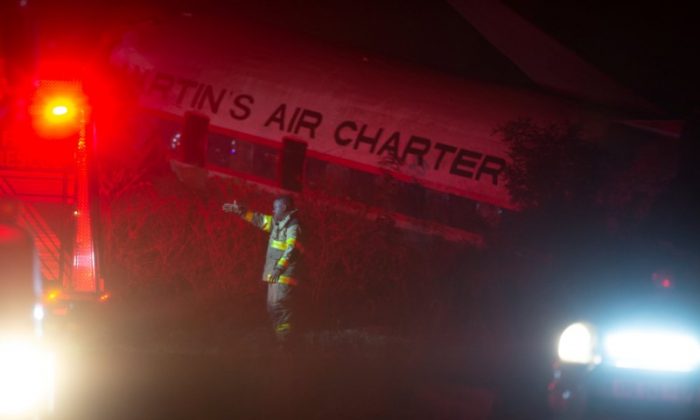 A fireman directs a truck at the scene of a plane crash outside South Africa's capital Pretoria, South Africa, July 10,2018. (Yeshiel Panchia/Reuters)
Africa

Australian pilots Ross Kelly and Douglas Haywood took the 64-year old Convair-340 plane on a test flight ahead of a long haul flight to Lelystad Airport in The Netherlands. Shortly after takeoff, video captured smoke billowing out of the plane’s engines, reported ABC.

While coming down, the vintage plane crashed into a small factory building, which is about 3.1 miles (5 kilometers) east of the Wonderboom airport. The impact killed one passenger and one factory worker who was inside the building, according to Aviodrome spokeswoman Lisette Kars.

“The plane crashed into the building where that person was working,” Kars said, reported The Australian.

“The first casualty was a person on the flight itself, a technical assistant from South Africa, and the second one was a factory worker from the building the plane crashed into.”

A380 captains Haywood and Kelly were taken to Johannesburg Hospital with critical injuries along with another Australian passenger. Kelly is a retired pilot.

“They’ve had a long time of experience with it, that’s why they were flying the plane,” Kars said, reported the newspaper.

The pilots had more than 37,000 hours’ flying experience between them as well as over 30 years’ service with the Australian airline.

A Qantas spokesperson said the airline’s pilot community was in deep shock over the accident. Most of the passengers on board were pilots, flight engineers or aviation enthusiasts.

“We were deeply upset to learn that two Qantas pilots, one current and one retired, were on board the vintage aircraft involved in an accident in South Africa on Tuesday,” a Qantas spokesman said, reported the newspaper.

“This news has shocked the Qantas pilot community and everyone’s thoughts are with the families. We’ve reached out and are providing whatever support we can.”

The local government emergency services spokesman, Johan Pieterse, said 19 passengers were on board the plane including the pilots.

The passenger who died in the crash has been identified as South African Chris Bernard, a technician. Authorities have not released the name of the factory worker who died later in hospital.

The Convair-340 plane, built in 1954, was on its way to the Aviodrome air museum where it was to become part of the museum. The plane was designed for medium distances. The group had planned a number of stops in six countries before its expected arrival in the Netherlands on July 23, Fairfax reported.

South African tour company, Rovos Rail Tours, restored the vintage plane for A$554,500 and donated it to the Aviodrome air museum.

The Aviodrome air museum displays the history of Dutch aviation with over 100 airplanes in sight. Aviodrome said in a statement that they were shocked by the news of the crash.

“We are very shocked that the Convair 340, the aircraft coming to the museum soon, has crashed during takeoff of a flight test in South Africa,” a translation of the statement said.

A video posted to Twitter on July 11 shows the moments before the vintage plane crashed.