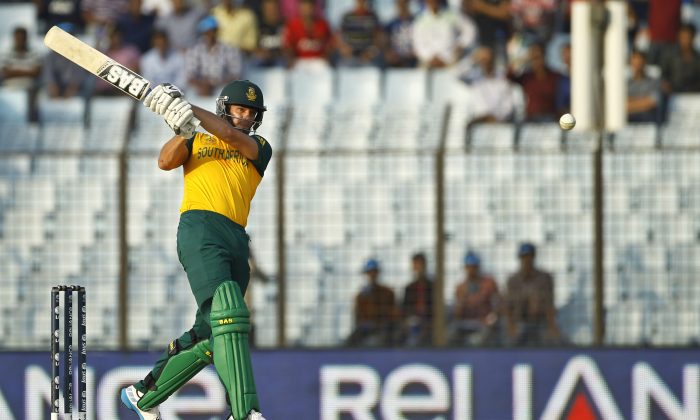 South Africa takes on the Netherlands in a 2014 World Cup cricket match on Thursday, March 27.

Next, South Africa faces England on March 29 while the Netherlands will take on New Zealand on the same day. See a full schedule here.

The teams are playing at Zahur Ahmed Chowdhury Stadium in Chittagong, Bangladesh.

It will be broadcast live on Supersport in South Africa and Sub Saharan Africa; OSN Sport Cricket in North Africa and the Middle East; NRK in the Netherlands; SKY Sports in England, Wales, Scotland, and Ireland; and Eurosport in the rest of Europe.

It will also be shown on PTV in Pakistan; Lemar TV in Afghanistan; Astro in Malaysia and Brunei; Star Cricket in Papua New Guinea, Singapore, Hong Kong, and the Philippines; and Sportsnet in Canada; Fox Sports in Australia; SKY TV in New Zealand; and Fiji TV in the Pacific Islands; on ESPN3 in the Caribbean, South America, Central America, Mexico, and the United States; and on STAR Sports in Bangladesh and the rest of the Indian Sub-Continent (India, Nepal, Sri Lanka, Maldives, Bhutan).

South Africa is coming off a two run win over New Zealand after it lost to Sri Lanka by five runs in its opening match.

The Netherlands hasn’t played in the Super 10 match yet after barely escaping from the first round by beating the UAE and Ireland, though it lost to Zimbabwe.