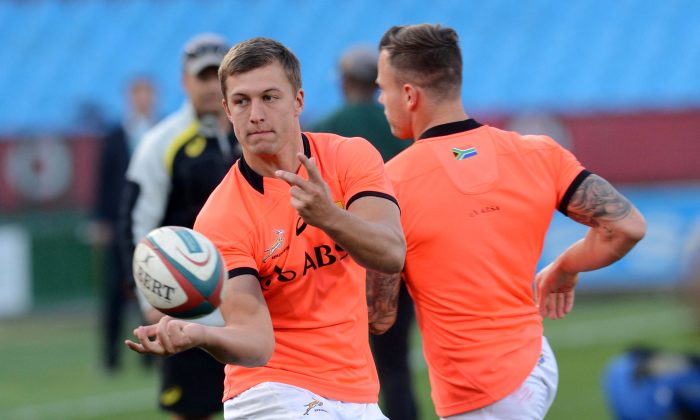 Handre Pollard during the Springboks Captains Run ahead of their Rugby Championship match against Argentina at Loftus Versfeld on August 15, 2014 in Pretoria, South Africa. (Lee Warren/Gallo Images/Getty Images)
Africa

South Africa will take on Argentina in a Rugby Championship match on Saturday.

The match will be broadcast on SuperSport in South Africa and ESPN Sur S.R.L in Argentina and other parts of Latin America.

Other broadcasters listed for The Rugby Championship includes Fox Sports in Australia, Sky Sports in New Zealand, OSN in the Middle East, BSkyB in the United Kingdom, Enjoy Television in Belgium, DTS in Spain, Sport TV in Portugal, Sky Italia in Italy, Canal Plus in France, SportsNet in Canada, DIRECTV in the United States, and J-Sports in Japan.

Live streaming will be available through most broadcasters, and LiveSport.TV. The latter requires an $8 a month subscription.

South Africa is the clear favorite, having never lost in 17 matches against the Pumas and only drawing once.

“It would come as a real shock to see Argentina turn over South Africa in Pretoria. The solitary draw in 2012 is the only positive in an otherwise terrible run of results for the Pumas against the Springboks and, although they showed signs of improvement against Ireland earlier this summer, they know South Africa are strong favourites for the win,” reported ESPN.

“Buoyed by the return of captain Jean de Villiers, the South Africans boast a number of players who led the stats tables for the 2013 tournament. De Villiers, Willie le Roux and Duane Vermeulen were all key men last term and once again feature in Saturday’s starting XV. Throw into that mix the young Handre Pollard at fly-half and head coach Heyneke Meyer has himself an impressive line-up.”

Check out squads below.