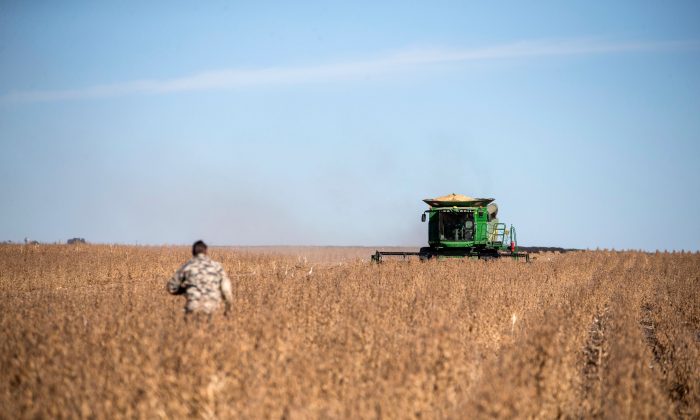 A farmer walks in a soya bean field toward the combine harvester near Bothaville, South Africa, on May 16, 2018. (Wikis De Wet/AFP/Getty Images)
Africa

JOHANNESBURG—She stumbled across the plains, gripping the hands of her frightened young daughters, her helper dragging panels of warped wood and sheets of rusted corrugated iron behind them through the red dust.

It was a chilly August morning in 2018, and 34-year-old Cynthia Maluleke (not her real name) was forging toward what she thought would be a “better life.”

The scene was a privately owned farm on the northern outskirts of Pretoria, and the Maluleke family was about to break the law, as part of a large group of people who had decided to occupy the land illegally.

Today, in her cramped, steaming hot shack, rebuilt from the same materials she hauled in hope last year, Maluleke said: “For years, nothing was happening on that land and we knew it would be more safe to put up our shacks there, because here where we are now living (in Soshanguve township), the criminals make life hell.

“We were also hearing all the time how the ANC (the ruling African National Congress) was going to give black people land, so we took a chance …”

At the ANC’s national conference in December 2017, an event that spelled the end of the corruption-wracked reign of Jacob Zuma and his replacement with Cyril Ramaphosa, the party resolved to consider expropriating land without compensating owners, as a way to put more land into black hands.

This would be a fair way to correct the wrongs of apartheid, the party said.

The announcement sparked a series of land grabs that continue to the present, according to the AfriForum civil-rights organization.

Ramaphosa has repeated that he won’t tolerate land grabs, and said the police will arrest and charge invaders. But AfriForum deputy leader Ernst Roets said, “If you listen to the state president and you compare that to what’s happening on ground level, it’s as if it’s two different worlds.

“Our on-site teams witness land grabs, like the one in Pretoria, and the police just stand there, doing nothing.”

In the case of the incident in which Maluleke was involved, AfriForum had to obtain a court order to compel the police to remove the farm invaders.

Roets’s group is just one of several that intend to oppose the ANC’s push toward legalizing land expropriation without compensation, a drive they say will intensify after the ruling party’s expected victory in the May election.

In an attempt to quell fears, including of investor flight, Ramaphosa emphasized that his government will begin a revamped land reform process, not by taking ground from white farmers, but by redistributing thousands of acres of state-owned land to poor black citizens for housing and agriculture.

This has, however, not appeased opponents of land expropriation, who maintain that the ANC’s plan to amend the Constitution is the beginning of a “project” by the party to access citizens’ private wealth.

“It’s important to realize that the ANC wants to change the property clause in the Constitution, not the land clause,” said Terence Corrigan, who manages a unit focused on land expropriation for the Institute of Race Relations.

So, if the party’s bill becomes law, Corrigan said the government will have the power to seize any private belongings, including houses, and not just land belonging to white farmers, if it deems such seizures to be in the interests of the state.

“What we are seeing are multiple drives to expand the discretion of the state and to reduce the opportunities to challenge when the state wishes to take property without offering a market value level of compensation.”

The ANC said it’s “ludicrous” to suggest that it wants to confiscate citizens’ property. It insisted it will respect private property and intends only to expropriate land to give to poor black people.

Corrigan responded that while this may be true at this stage, a law allowing the state to take property when it sees fit could easily be abused by a corrupt administration in the future.

“You’re meddling with the core relationship between the citizen and the state, for what? For some sort of political symbolism? The precedent being set here is deeply sinister.”

Although the ANC denied it, Corrigan said there’s the danger of a law allowing expropriation without compensation being extended to allow the government to use citizens’ savings to fund its projects.

“There would be a great deal of dissatisfaction and pushback should that happen. People who might feel that the land issue is something that doesn’t concern them directly might feel very differently, if it becomes a case of what will happen to their savings or their pension funds or any other assets that the state might develop an appetite for.”

‘State Owning the Means of Production’

The ANC’s manifesto, released ahead of the upcoming poll, said it will “investigate” the introduction of “prescribed assets” on financial institutions.

If such an introduction is made, according to financial experts, the government could use pension funds to prevent South Africa’s beleaguered state-owned enterprises from going bankrupt.

Chris van Zyl, policy head at the Transvaal Agricultural Union, said that “South Africa mustn’t be fooled” into thinking that white farmers are the only targets of the ANC’s proposed law.

“Expropriation is not necessarily restricted to land. It could include any form of (private) ownership: trusts, buildings; South Africans from all groups might be dispossessed if the government decides it is necessary.

“We call on them to join a united front to fight this using all legal means.”

AfriForum insisted that the ruling party’s expected change to the Constitution has “little” to do with bringing about more racial equality in land holdings.

“The South African government already owns more than 4,000 farms that it could use for land reform,” said Roets. “In fact, of all the land the ANC government has acquired since they came to power (in 1994), only 6 percent has been transferred into private ownership. So this is not about land reform; it’s not about giving land back. This is about the state owning the means of production.”

He says AfriForum’s legal team is ready to oppose that, and it has a formidable record against the government in court.

Just as they did in 2018, AfriForum’s representatives travel worldwide to raise international awareness about what Roets describes as the “gravest threat” to democracy in South Africa since apartheid, and what the ANC describes as one of the greatest steps forward to racial and economic equality in the country.