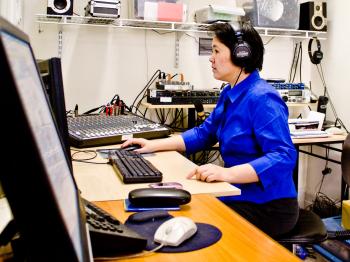 Yue Chen sits at her computer, part of the modest set-up at Sound of Hope's Manhattan office. She has been with the broadcaster, which focuses on human rights in China, since its inception in 2003. (Matthew Robertson/The Epoch Times)
International

Sending Shortwaves of Hope from Manhattan to China

By Matthew Robertson
Print
NEW YORK—Starting at 6 a.m. every morning, the news script begins to be prepared for the anchor. At 9 a.m., the anchor gets in, prepares for an hour. At 10 a.m., to the frustration of communist authorities and the delight of ordinary citizens in mainland China, the Sound of Hope Radio Network (SOH) starts its live shortwave news broadcast from a cramped Manhattan office.

SOH was founded in 2003 by a group of Chinese human rights activists, most of them practitioners of the Falun Gong spiritual discipline. Its base is in San Francisco, with offices in New York and around the world.

It broadcasts into China eight hours a day, getting by on a skeleton staff and shoestring budget.

The station pays for its operating costs mostly from donations. Of those who founded the station, some had professional backgrounds in broadcast journalism in China, while many didn’t. “Some staff work [day jobs] full time, they do this at night. Some can spend a lot of time on this,” said Yue Chen, chief editor at the SOH New York office. “So for us, our source of funding is really important; if funding permitted, we could do much more.”

Despite the difficulties, the station has had a significant impact.

The network has become a platform for Chinese academics, dissidents, activists, and commentators inside and outside China to express their opinions and stances; about half a dozen have their own regular column, while others take up invitations to comment on topical news and events.

Those critics still in China know to keep their criticism of the communist regime within a certain range. Those outside the country often let it fly.

“We’re the most direct when it comes to reporting on the Chinese Communist Party (CCP), and our analysis is the sharpest,” Yue Chen said matter-of-factly. “We don’t fear the CCP’s pressure. We don’t leave them any space. We won’t not report on something because of the CCP or because of pressure.”

The uncompromising attitude has lead to some difficulties. Staff report that their family members in China get visits from security officials. “They come and say ‘tell your sister to come back to China, to have a look at how it is’ or ‘tell your brother not to say those things about our country,’” said Chen, who has a Ph.D. in biology and once worked at a community radio station.

The station covers all of the mainland, including Tibet and Xinjiang. The signal also finds its way to Japan and Korea at times, as shortwave hobbyists there have attested to in letters to SOH’s office.

Shortwave radio culture is far more developed in China than in the West, since for years after the Cultural Revolution it was the only way for Chinese people to access foreign media.

Since the founding of the People’s Republic of China in 1949, the country’s media have been owned and controlled by the CCP. As time has shown, Chinese media exist to serve the Party’s interests. They announce policy, collect intelligence, and “educate” and mobilize the masses through propaganda. Recent years have seen a move toward commercialization of the Party’s media organs, but the Central Propaganda Department still plays a leading role in determining what can and cannot be reported on.

For example, in July 1999 alone, following the beginning of the campaign to persecute Falun Gong—the traditional Chinese spiritual discipline that Yue Chen and many of her colleagues practice—Party newspapers each published between 300 and 400 reports vilifying the practice. In the same vein, state propaganda describes the Dalai Lama as a jackal and Uyghur leader Rebiya Kadir as a terrorist.

Media with the backing of Western governments like the BBC, Voice of America, and Radio Free Asia have all been broadcasting shortwave into China for years, but SOH says it can bring something new to the table.

“Westerners see China a certain way; they have their own thoughts about the CCP leadership and so forth. We’re a bit clearer, go a bit deeper, and we achieve a bit more. We have a lot of experts,” Yue Chen said.

In addition to news reporting, SOH has a cultural section, with stories about traditional Chinese culture and ethics, and how they apply to modern life. This also appeals to listeners, Chen said.

The first week after SOH was set up they had a smooth ride when it came to transmission clarity. “But the CCP found out pretty quickly,” Chen said. As it has done for years with Western-backed shortwave stations, the CCP began jamming their signal. A Radio Free Asia journalist once commented to Chen that their own signal in major Chinese cities started to get clearer after SOH began broadcasting, since apparently Party officials decided to divert their jamming resources to the newcomer.

SOH later boosted its signal strength and broadcast hours, and their signal now is mostly free from disruption.

Listeners have written or called into SOH saying they stopped listening to Voice of America or Radio Free Asia, instead opting for the SOH broadcast. Poverty-stricken petitioners camping out in Beijing have called into SOH telling of how a small group put their money together to buy a good shortwave radio so they could get the SOH signal. Over the years, thousands of listeners have written and called in. Some download SOH programs on human rights abuses in China and distribute them to their friends and family.

So why the name, Sound of Hope?

“We report truthfully on things happening in China, and provide analyses with directness and depth. We also transmit Chinese culture, the 5,000 years of history, the old morals, ancient stories,” Chen said. “When we expose the CCP and analyze its crimes, we also base this in traditional Chinese culture and moral values.”

Their broadcast, Chen says, is meant to allow Chinese to “Walk out of the lies and tricks that the CCP made for the people, and the misperceptions that CCP media have given them.”