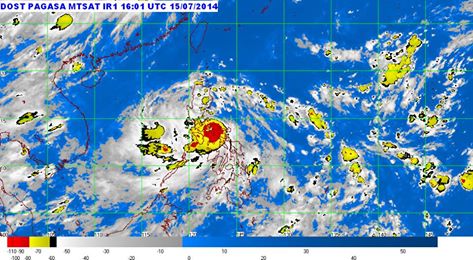 The storm had landed near Albay Province, including Legazpi City, as of 8 p.m. local time.

PAGASA said that the typhoon, which is also known as Rammasun, intensified further as it traversed the Ragay Gulf and moves towards Southern Quezon.

PAGASA warned that in Albay and the other areas under alert, potential impacts of the high winds include heavy damage to agriculture, the uprooting of some large trees, the loss of some roofs, and moderate to heavy disruption of electrical power and communications services.

It also said that the majority of nipa and cogon houses would be unroofed or destroyed while “considerable damage” was expected to structures of light and medium construction.

Both Albay and Sorgoson were under Storm Signal No. 3, which means that winds are expected to blow from 101 to 185 kilometers per hour (62 to 115 miles per hour).

Low-lying areas could experience heavy flooding while landslides may occur in mountainous areas.

Residents are instructed that travel by land, sea, or air is dangerous, and that the typhoon should be out of the Philippines by early Thursday.