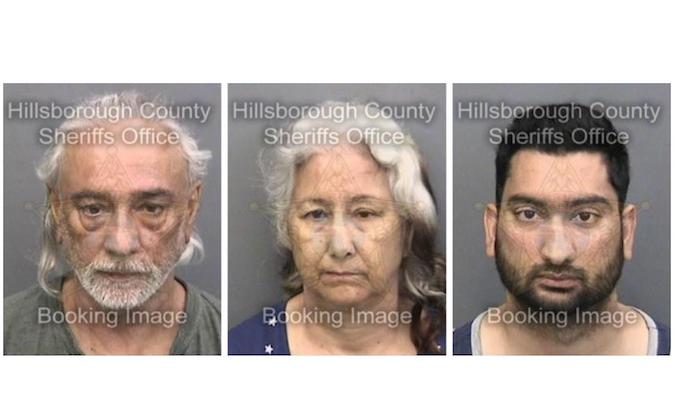 An adult son and his senior parents were arrested in Hillsborough County, Florida, on Saturday, Sept. 2, for beating and illegally confining the son’s wife.

The son, 33-year-old Devbir Kalsi, had asked his parents to come to America from India to help “counsel and discipline” his wife, 33-year-old Silky Gaind, investigators told the Tampa Bay Times.

The three foreign nationals were arrested by the Hillsborough County Sheriff’s Office, and remain in prison under $860,000 total bail requirement as well as a Nebbia hearing requirement that compels the accused to disclose the source of any bail money.

Police said the parents traveled from India at their son’s request after he told them Gaind was being disobedient.

Police learned of Gaind’s plight after she called her parents in India to tell them of the beatings. They then called authorities.

Deputies told the Times Gaind was “badly beaten and bruised over her entire body” from beatings by her husband and his parents. The beatings were ongoing and happened over an extended period, they said.

The father, 67-year-old Jasbir Singh Kalsi, is being held on $375,000 bail and has been charged with child abuse, aggravated assault with a deadly weapon, harassing a witness, and false imprisonment, according to documents.

While a public information officer was unavailable to answer questions when contacted by The Epoch Times, the booking report for the father noted in abbreviation “DOM VIOL KNIFE.”

The son is being held on $375,000 bail also and is charged with felony battery, false imprisonment, harassing a witness, and child abuse.

The mother, Bhupinder Kalsi, 61, is being held on $110,000 bail and is charged with battery domestic violence, and failing to report child abuse.

When deputies arrived at the young couple’s home early Saturday morning, they confirmed people were inside, though no one answered after repeated knocks.

Gaind eventually tried to open the door and screamed for deputies to save her and her child. A deputy then forced the door open before the son tried to push it closed. As the deputy began arresting him, he was confronted by the parents.

According to an arrest report obtained by the Times, the son and his wife got into an argument on Friday night during which she was holding their child. He struck her “repeatedly and forcefully.” The parents began hitting her also after she attempted to defend herself.

The child was inadvertently hit in the face before being put in a separate room.

The father also threatened to stab her with a kitchen knife, according to the report.

Deputies say the son later took his wife’s phone and dragged her to a different room where she was locked inside.

The Sheriff’s office told the Times that Gaind and her 1-year-old child have been moved to a safe place.