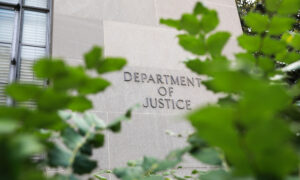 The multimillionaire financier was found unconscious in his jail cell at a federal prison in New York City on Aug. 10 and pronounced dead about 90 minutes later. The financier was awaiting trial on child sex trafficking charges.

New York City’s Chief Medical Examiner, Dr. Barbara Sampson, ruled that Epstein died from hanging and that the manner of death was suicide.

But forensic pathologist Dr. Michael Baden, who was hired by Epstein’s brother, Mark Epstein, to observe the autopsy, said this week: “I think that the evidence points toward homicide rather than suicide.”

“Hanging does not cause these broken bones, and homicide does,” he said. “A huge amount of pressure was applied.”

De Blasio said after Sampson’s statement that he believes there’s something amiss.

“Something doesn’t fit here. It just doesn’t make sense that the highest-profile prisoner in America, you know, someone forgot to guard him,” he told reporters at a press conference.

“I want to understand, I think everyone wants to understand, what really happened. I don’t know what the nature of the death was. I just know it should never have happened, and we still don’t have good answers.”

De Blasio has expressed doubt about what happened before, saying in August: “This is way too convenient. This makes no sense.”

“I’m going to say it a little more simply from my point of view. The one thing I do not think is possible here is pure traditional human error, some guard fell asleep or someone didn’t cover their shift,” de Blasio said. “That’s the one thing I would rule out given the prominence of the case and the nature of the situation, which means something else happened. I don’t know what that something else is. But it needs to be investigated.”

The death caused an uproar across America as people wondered aloud what really happened and expressed disappointment that Epstein avoided justice.

Investigations into what happened have been launched by the Department of Justice’s Bureau of Prisons, the FBI, the department’s inspector general, and the House Judiciary Committee.

Attorney General William Barr at the time said he was “appalled” by the death and cited “serious irregularities” at the federal prison where Epstein was being held.

“We are now learning of serious irregularities at this facility that are deeply concerning and demand a thorough investigation. The FBI and the Office of Inspector General are doing just that,” Barr said on Aug. 12.

“We will get to the bottom of what happened and there will be accountability. But let me assure you this case will continue on against anyone who was complicit with Epstein. Any co-conspirators should not rest easy. The victims deserve justice, and they will get it,” he added.