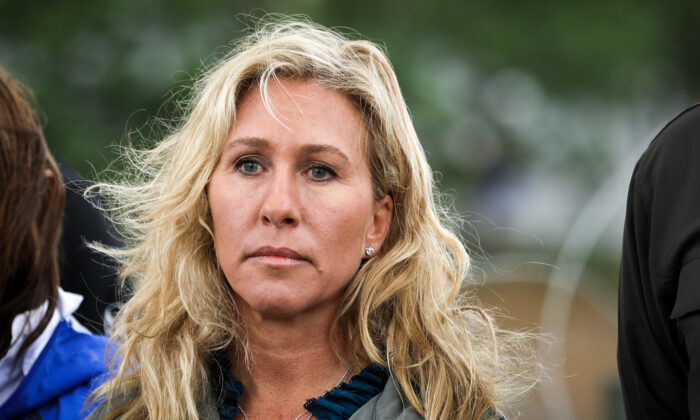 ‘Someone Wanted to Get Me Killed’: Rep. Greene Responds to Being ‘Swatted’ 2 Nights in a Row

Rep. Marjorie Taylor Greene (R-Ga.) was sound asleep in her Floyd County home when the doorbell and knocks on her front door woke her up. There were flashlights and people outside her bedroom window.

Quickly, she jumped out of bed, got dressed, and walked to the front door. By instinct, she reached for her gun, although something told her to put it down.

The decision to not take her gun may have saved her life.

At her front porch were five police officers with their guns ready. They told the confused congresswoman that they were responding to a report of a fatal shooting at her house—a man shot five times in a bathtub, with a woman and children still in the residence—indicating violence could escalate.

“I think you got swatted,” the police told Greene after they realized what was happening. Swatting, the act of using prank calls to send tactical police to the victim’s home, is a federal crime and has previously led to serious consequences.

“So what that is is someone wanted to get me killed,” Greene said on “Capitol Report,” a program on The Epoch Times’ sister outlet NTD. “They wanted to send the police to my house, into a situation where they thought there was murder happening, in hopes the police would kill me or someone else in my home.”

The incident, which occurred in the early hours of Aug. 24, would mark the first of two successive swatting attempts in 26 hours targeting Greene over her stance on transgender issues.

In the first prank call, the caller claimed to be from a Virginia crisis line. After the police responded to the report, the suspect called back using a computer-generated voice, saying they were connected with a website called “kiwifarm.net,” a site that supports cyberstalking, according to the police report shared with The Epoch Times. The person said they were upset about Greene’s position on “trans-gender youth’s rights.”

Greene a week earlier had proposed a legislation called the “Protect Children’s Innocence Act,” which would make it a class C felony for anyone to knowingly perform medical treatment on a minor meant to alter their biological sex. The penalty under her bill is 10 to 25 years in prison with a maximum fine of $250,000.

Speaking about her bill on Thursday morning, the lawmaker appeared unflinching. “We need to protect kids and allow them to grow up before they make these life-altering decisions that can never be undone,” Greene said.

A second fake shooting call came the following day just before 3 a.m. In the call, made through an internet chat, a person claiming to be Wayne Greene said they “came out as transgender,” had shot their family members, and threatened to turn the gun on themself, according to a. Aug. 25 police report.

“If anyone tries to stop me from shooting myself, I will shoot them,” said the caller, who warned that “they would be waiting for us,” the report stated.

Two officers went to Greene’s home and alerted her to the situation at her front door.

The police couldn’t determine the caller’s location due to the person using a VPN, a tool that encrypts a user’s internet history, according to the report.

Greene expressed gratitude for the local law enforcement’s handling of the incidents.

“They are on the ball, and they definitely know what’s happening now,” she said, adding that she has deep trust in the local officers and feels “very safe” with them.

But such an abuse of police resources has to stop, Greene said, noting that her local police department is now hiring an additional 18 officers.

“They’re already undermanned, so they don’t need to be coming to my house for someone who’s trying to politically target me, they need to be able to respond to any other serious situation in our area,” she said.

Greene accused the mainstream media of being “complicit” in what happened to her. Recent news headlines have painted her as “targeting trans kids, which is such a horrible lie,” she said, noting that some former transgender youths have come out to share their regret in public.

“They went through the hormones that have changed their voices forever, puberty blockers that will give them lifelong problems like low bone density and chemical castration. These are serious things,” she said. “But the mainstream media, the way they lie about me, they are targeting me in such a dangerous way that they may get me killed.”

“It’s coming to a point where I may start having to sue them for what they’re causing people to think about me,” she added.