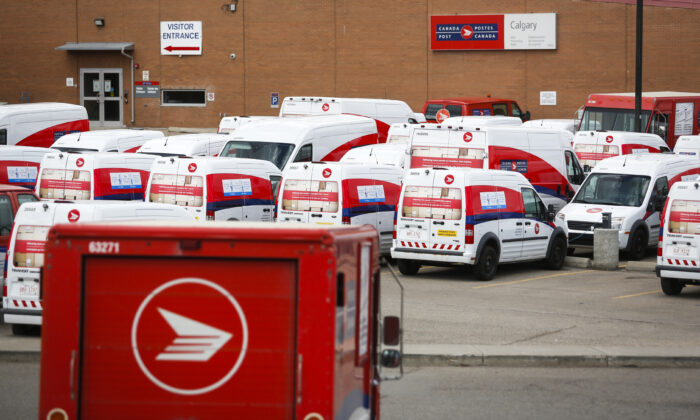 Delivery vehicles are seen at Canada Post's main plant in Calgary in a file photo. (The Canadian Press/Jeff McIntosh)
Canada

However, now that the feds have suspended that mandate, not all of those companies are promptly doing the same. Their unvaccinated workers who had been put on leave for non-compliance continue to face uncertainty as to when they will be able to return to work.

Canada Post is an example. An internal email obtained by The Epoch Times indicates that the Crown corporation will follow the feds’ direction but based on its own timeline.

“As with the initial implementation of the practice, we will follow the Government’s direction and look to suspend our practice, with our own timelines to ensure a safe and orderly transition,” said the email issued June 14, the same day as the federal government’s announcement.

Hence, Canada Post employees on leave without pay since last fall will not be allowed back to work on June 20, as federal public servants and transport workers will, but at a later date still to be determined.

To put the situation in context, those employees lost in arbitration a few weeks ago after the Canadian Union of Postal Workers filed a grievance on their behalf against Canada Post over the vaccine mandate.

Employees of another delivery service, Purolator, are facing even more uncertainty, with the company stating that it will not revise its mandatory vaccine policy in light of the government’s announcement but will do its own evaluation.

Purolator, which is 91 percent owned by Canada Post, told its employees in a note on June 16 that “the federal announcement does not impact Purolator and our current COVID-19 Safer Workplaces policy will remain in place.”

“We continue to receive guidance from medical experts, our customers and public health officials, and will continue to evaluate this policy throughout the coming weeks,” the note said.

Purolator is taking this stance while facing legal action from a group of unvaccinated employees.

Meanwhile, in another case, an arbitrator sided with the workers in a decision regarding the COVID-19 vaccine mandate at Fiat Chrysler Automobiles Canada, a subsidiary of Stellantis.

Dave Cassidy, the president of Unifor Local 444, announced the decision on Twitter on June 18.

The automaker had put more than 300 workers on unpaid leave for refusing to be vaccinated or not disclosing their vaccination status, CBC reported in May. Cassidy says those workers will now be able to go back to work on June 25.

Stellantis dropped the mandate for its American employees in January after the U.S. Supreme Court blocked the Biden administration’s mandate for large businesses, but left the vaccine mandate in effect for employees in Canada.

Coca-Cola Canada, on the other hand, won its arbitration on March 17 after Unifor Local 973 filed a grievance against the beverage company over its mandatory COVID-19 vaccination policy.

The Epoch Times contacted Coca-Cola Canada to find out if its mandate will remain in effect but didn’t hear back.

Montreal-based international consulting services firm WSP also imposed a vaccine mandate on employees. Those who refused to get vaccinated or to disclose their status but could work from home were able to keep their job, however.

The firm’s COVID-19 policy, dated May 16, states that “WSP Canada is actively monitoring applicable legislation across the country to ensure that COVID-19 controls for work in the workplace are met until they are no longer in effect in each jurisdiction.”

The policy says that WSP is “agile” and “will increase the pace of easing controls” if the pandemic subsides, but that the company will adjust the controls in the event of a new wave or variant.

The Epoch Times contacted WSP to ask if it will follow the federal government’s move to suspend its vaccine mandate, but didn’t receive a response by publication time.

All of the five big Canadian banks had abandoned their mandatory COVID-19 vaccination policies by the end of May.