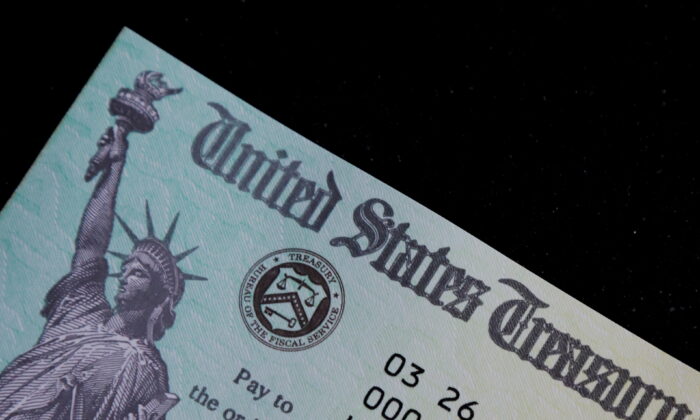 A family's stimulus check from the U.S. Treasury for COVID-19 aid arrived in the mail in Milton, Massachusetts, on March 25, 2021. (Brian Snyder/Reuters)
Economy

WASHINGTON—The U.S. Treasury on Monday launched access to $350 billion in COVID-19 aid for state, local, tribal, and territorial governments, but 30 states with faster-recovering employment are likely to see their funds split into two payments a year apart.

Some 20 states and the District of Columbia will be able to receive all of their funds as soon as this month because their unemployment rates are now more than two percentage points above levels in February 2020 before the pandemic prompted widespread U.S. lockdowns, a Reuters review of Bureau of Labor Statistics state unemployment data showed. The rule was clarified in new guidance from Treasury released on Monday.

States with smaller increases in unemployment will receive their aid in two tranches a year apart. The BLS data showed there were 30 states in this category, 21 of which were won by former President Donald Trump in the 2020 elections.

Of the states that can get all of their funds in a single payment, only four—Texas, South Carolina, Louisiana, and North Dakota—were won by Trump.

A Treasury official told reporters that the year delay for some states, specified by Congress with the formula determined by the Treasury, would nonetheless help them in planning their budgets and they would still receive a substantial amount in the initial payment.

Treasury said $65.1 billion has been allocated to counties and $45.6 billion for metropolitan cities, which will both get their funds in two tranches a year apart, with the first payment coming in May.

Tribal governments, which receive a combined $20 billion, will receive an initial payment in May and a second payment in June based on employment data. The $4.5 billion allocated for U.S. territories will all be delivered in May, the Treasury said.

The Treasury said the eligible uses for state and local funds include public health responses to the pandemic and replacement of revenues lost to the pandemic determined through a formula in Treasury guidance. Uses also include addressing negative economic impacts from the pandemic, including aid to unemployed workers and hard-hit communities, and premium pay for essential workers.

The Treasury also said the funds can be invested in improvements to water, sewer, and broadband Internet infrastructure.

But the Treasury maintained its plans to prohibit states from using the funds to offset tax cuts, a provision that has prompted lawsuits from five Republican-controlled states. With its case still pending, Ohio’s legislature in April approved a 2 percent income tax cut totaling about $380 million over two years.

“If a state or territory cuts taxes, they must demonstrate how they paid for the tax cuts from sources other than Coronavirus State Fiscal Recovery Funds—by enacting policies to raise other sources of revenue, by cutting spending, or through higher revenue due to economic growth,” the Treasury said.

States must pay back COVID-19 aid funds in the amount of their tax cuts if they cannot demonstrate such offsets, Treasury said.

The Treasury also clarified that it would prohibit state and local governments from using the funds for debt service or deposits to “rainy day” funds or other financial reserves.