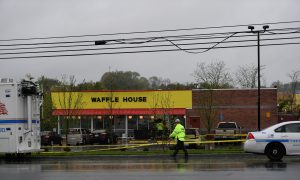 NASHVILLE, Tenn – Public schools are on “lock-out” security Monday, April 23, in a Nashville, Tennessee, neighborhood near the Waffle House where a nearly nude gunman killed four people and wounded three others.

Scores of police officers, along with the FBI and other law enforcement agencies, hunted overnight for the suspected shooter, Travis Reinking, 29, originally from Tazewell County, Illinois.

Police say Reinking fled the restaurant early Sunday in the Antioch neighborhood after a patron wrestled an AR-15 assault-style rifle from him as he was reloading, police said.

The gunman, who was naked but for a green jacket, first shot and killed two people in the parking lot of the restaurant in southeastern Nashville, shortly before 3:30 a.m. Sunday (0830 GMT).

He then entered the restaurant and opened fire, police said, killing one patron and wounding another, who later died. Two other people were in critical condition at a hospital.

One diner, James Shaw Jr., 29, who hid near a restroom, dashed out and pulled the rifle from the gunman. His fast actions were credited with saving lives, but Shaw said at the news conference Sunday that he was no hero.

“I just wanted to live,” said Shaw, who was grazed by a bullet.

As the shooter ran off, he discarded the jacket, which contained additional ammunition, according to police. Reinking is believed to be still armed with a pistol, police said.

All Metro Nashville Public schools in the area have been searched overnight and will be checked again before school opens, officials said on the department’s Facebook page. Extra security will be in place at school bus stops.

No visitors or unauthorized people allowed on the campuses. The exact number of schools affected was not disclosed.

“Metro Nashville Public Schools Parents always have the final decision on whether to send their child to school,” the statement said.